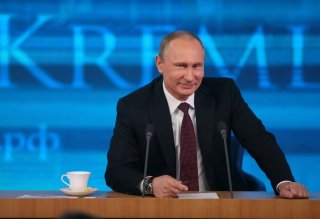 Here's What You Need to Remember: The submarine Irkutsk, which was commissioned in December 1988, is now the first to undergo the modernization to 949AM version at the Zvezda shipyards in the Russian Far East.

During the Cold War, the Soviet Navy operated a sizable submarine force. After the collapse of the Soviet Union in 1991, the Russian Navy fell into hard times and that included its fleet of submarines. In recent years, Moscow has committed to building new subs, while modernizing the older boats.

Among those aging submarines that have gotten a new lease on life are those of Project 949 Granit and Project 949A Antey (NATO reporting names Oscar I and Oscar II). A total of twenty of the nuclear-powered cruise missile submarines were originally planned with the first commissioned in 1980. Since then six were canceled—including four that were never laid down. Two of the canceled boats had their respective parts used in the construction of newer submarines, while the hulls have remained intact and construction could be restarted in the future.

Four of the aging boats have been retired, while the 949A boat Kursk was lost in an accident in the Barents Sea in August 2000, killing all 118 personnel on board.

The remaining Antey-class submarines will undergo an upgrade that will extend the service life by a decade. The submarine Irkutsk, which was commissioned in December 1988, is now the first to undergo the modernization to 949AM version at the Zvezda shipyards in the Russian Far East.

“The modernization of the [underwater] cruiser will make it possible to extend its service life by at least ten years and expand the Pacific Fleet’s combat potential,” Defense Minister Sergei Shoigu said at the ministry’s conference call on Tuesday, TASS reported.

During the refit, the nuclear-powered submarine Irkutsk (K-132) will be outfitted with the latest missile, torpedo, and radio-technical armaments and advanced communications systems to boost its combat efficiency. Among the planned upgrades will be the addition of a universal launch complex system that will enable the submarine to carry and launch Tsirkon (Zircon) hypersonic missiles.

While work on the boat has been slow going, the participants in the Defense Ministry’s conference call reportedly address the problems in the work to put the submarine into operation, including the timeframe of the necessary sea trials after repairs and modernization. Irkutsk is currently scheduled to be handed over to the Pacific Fleet in 2022.

A second submarine of the class, Chelyabinsk has been laid up since 2008 but could be the next to be upgraded.

The Russian Navy Main Command had previously announced plans to have seven Project 949A and Project 949AM Antey subs in service with the Northern and Pacific Fleets by the end of 2023. As noted, the modernization will greatly improve all of the Antey-class submarines strike capabilities. This would include the capability for each boat to carry forty-eight Kalibr-PL missiles, as well as Oniks or Tsirkon hypersonic missiles.

While the efforts to modernize the aging submarines are still only slowly moving forward, each could be a formidable platform when—perhaps if—the modernization is actually completed.