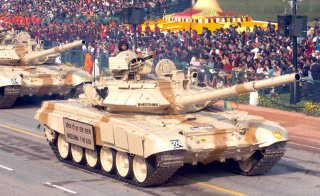 Here's What You Need To Remember: It should be noted that the export tank’s successor, the markedly more powerful but also more expensive T-90MS, is being offered in addition to the T-90S rather than as its strict replacement. The Kremlin seeks to target different segments of the heavy armor market by continuing to offer the T-90S, which remains viable in a wide range of medium-intensity conflicts across the second and third world.

In a tank world of ever more expensive bells and whistles, Russia’s T-90S tried to tell a design story of modesty and value-driven restraint. Did it succeed?

The Russian military suspended domestic orders of its cheap, effective T-90 tanks in 2011, but continues to offer the T-90S export variant. Russian media reported earlier this week that Vietnam has received over thirty T-90S and T-90SK units, the first batch of a 2016 order for sixty-four of these tanks.

Jane’s Defence Report corroborated this development with a statement from a Vietnamese military insider: "The first batch of T-90S MBTs - totaling no fewer than 30 platforms - was delivered to a Vietnamese seaport in December.

Introduced in 1992 by the manufacturer Uralvagonzavod, the original T-90 battle tank quickly became a staple armor solution of the Russian Land Forces for its cost-effective blend of firepower, handling and durability. Resisting the twin temptations to reverse-engineer the competing American M1 Abrams on the one hand and to splurge on an entirely new design concept on the other, Russian engineers instead opted for a no-frills solution that weaved together the best design principles from their previous T-72 and T-80 tanks. The result was a clear iterative step forward, combining the T-80’s battle-tested 1A45 fire control system with the hull and maneuverability of the T-72.

Notably, they achieved this at around half the production cost of the M1 Abrams. The T-90 jettisoned cutting-edge innovation for raw performance value, a winning strategy for enticing global importers who prioritize cost-effective functionality over the inclusion of the latest cutting-edge technology.

The T-90’s export variant, the T-90S, was largely a copy of the original. It offered the same 125mm 2A46M smoothbore gun, also powered by a 840-horsepower (hp) V-84MS engine. More significant differences were to be found in the T-90SK, a commander’s version featuring additional radio and navigation systems over the baseline T-90.

The T-90S scored a slew of major export successes over the past decade. India purchased over 300 T-90S units, albeit without their integrated Shtora-1 electronic countermeasure (ECM) system. Other T-90S buyers come from a veritable who’s who list of Soviet arms purchasers: Azerbaijan, Turkmenistan, Algeria, Libya and allegedly Venezuela; less likely candidates include Peru.

Most interestingly, the Iraqi government agreed to purchase over thirty T-90S tanks to replace their more expensive M1 Abrams units on the heels of a diplomatic row with Washington.

In a notable illustration of external market forces driving internal modernization, minor improvements to maintain the competitiveness of the T-90S were rolled into the subsequent T-90A upgrade. These included a welded turret and, later, a more powerful 1,000 hp V-92S2 engine.

Rosoboronexport, Russia’s exporting agency, is scheduled to complete the rest of Vietnam’s T-90S order in 2019. While no weapon can retain market relevance forever, the T-90S has proven remarkably resilient due to a series of sound design choices on the part of its manufacturer.

It should be noted that the export tank’s successor, the markedly more powerful but also more expensive T-90MS, is being offered in addition to the T-90S rather than as its strict replacement. The Kremlin seeks to target different segments of the heavy armor market by continuing to offer the T-90S, which remains viable in a wide range of medium-intensity conflicts across the second and third world.