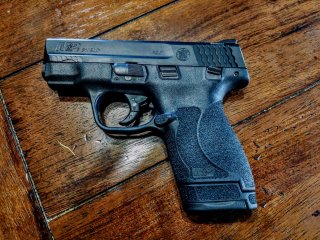 Here's What You Need to Remember: The M&P Shield 2.0 is one of the most popular compact handguns on the market, and it’s not hard to see why. The wide variety of choice, from ergonomics to aiming devices, makes it clear that Smith & Wesson is paying attention to market trends and user choice.

Another key requirement for concealed carry users, a narrow pistol, is achieved by using single-column magazines. Most full-size nine-millimeter handguns pack fifteen rounds or more by using a double-stack column that greatly increases the number of rounds a handgun can store. The downside is a wider grip that, although perfectly fine for duty carry, makes it more difficult to conceal on a person under clothing. The use of a single column magazine allows the M&P Shield 2.0 to have a width of just .99 inches.

A striker-fired pistol, the M&P Shield 2.0 uses a striker instead of a hammer to strike a firing pin, discharging the pistol. The pistol includes a manual thumb safety. Unlike other striker fired pistols, the Shield 2.0 allows for disassembly without pulling the trigger, an important safety feature that adds a measure of safety to the takedown process. Some models include interchangeable palm swell grips of varying sizes to accommodate different hand sizes, allowing the user to create a custom fit.

Kyle Mizokami is a writer based in San Francisco who has appeared in The Diplomat, Foreign Policy, War is Boring and The Daily Beast. In 2009 he co-founded the defense and security blog Japan Security Watch. You can follow him on Twitter: @KyleMizokami. This piece was first featured in April 2019 and is being republished due to reader interest.