Why the Strait of Hormuz Will Remain a Flashpoint With Iran 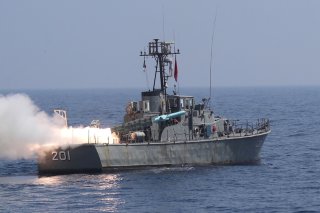 Here's What You Need to Know: While the Iranian Navy and IRGC(N) retain the capabilities to, on paper, substantially disrupt transit through the Strait of Hormuz, a scenario specific analysis illustrates that the ability of Iran to accomplish this end is overstated.

If Iran cannot shut down the Strait of Hormuz, or convince either the United States or its regional allies such as Saudi Arabia that it can do so, then it becomes attendant to ask what the value of limited coercive acts is. One argument goes that limited actions can achieve disruption and price spikes with regards to oil irrespective of whether Iran can shut down the Strait of Hormuz. However, it is unclear how this would help coerce either the United States or Iran’s regional adversaries. Driving up the price of oil globally does not hurt regional countries, which rank among the world’s major oil producers, and will likely have mixed effects on the economic health of the United States, which is an increasingly large player in the energy market. To the extent that limited attacks could serve a coercive role, it would be as costly signals of Iran’s willingness to shut down the Strait of Hormuz entirely—something that would have a major effect on regional powers which rely on the straits for up to 90 percent of their imports and exports. Given that Iran’s ability to sustain such an operation is limited, however, and given that shutting down the Strait of Hormuz entirely entails unacceptable escalatory risks , it is unclear why decisionmakers in Tehran would expect their counterparts in Riyadh or Washington to treat the threat to do so as being credible irrespective of Iran’s limited provocations. Even if leaders worry that they might have miscalculated Tehran’s intentions, the fact remains that Iran’s capabilities cannot sustain the closure of the Strait of Hormuz for a prolonged period of time. To make this threat credible then, Iran’s likely opponents would have to believe that Iran would risk heavy retaliation, the possible dismantlement of IRGCN facilities at Abu Musa and Farsi and a postwar settlement which would almost certainly be negative in order to create a temporary closure of the Strait of Hormuz.