Why Is There So Little Water Left on Mars? 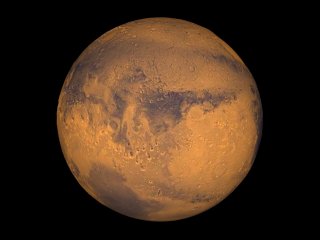 But what about water? Water on Mars is currently found on the surface as a layer of ice – several kilometres thick – at the north pole. It also appears as seasonal frost at the coldest times of the year, and in the atmosphere as vapour and ice. Nevertheless, the Martian atmosphere is extremely dry compared to Earth’s, with about 100 times less water. While precipitation on Earth results in water layers several centimetres thick, water that would precipitate on Mars would only form a thin film of less than a millimetre.

New data now provides a better understanding of why there is (almost) no water left on Mars.

Water escapes from the Martian atmosphere

The evidence suggests that Mars was not always the cold, arid planet we observe today. There is plenty of evidence of water on Mars’ surface in the distant past – about four billion years ago. At that time, liquid water flowed in great streams and stagnated in the form of pools or lakes, such as in the Jezero crater explored by the Perseverance rover, in search of traces of past life.

For liquid water to circulate and reside on the surface long enough to leave these marks, there must have been a radically different climate than the one we see today. Mars, Earth and Venus probably formed from the gradual accumulation of the same basic materials, which means that they must have had great similarities early in their history. But while Earth and Venus have retained most of their thick atmosphere, Mars, because of its small size and low gravity, has lost most of its atmosphere.

It is indeed this “loss of gas to space” that helps explain the current tenuousness of Mars’ atmosphere. This loss occurs very high in the atmosphere, above 200km, where molecules have already broken down into atoms and where the lightest ones, such as hydrogen, can be torn away from the weak gravity of Mars. Exposed to the energetic particles of the solar wind, Mars’ exosphere (the upper layer of the atmosphere) has allowed the equivalent of hundreds of present-day atmospheres to be lost to space.

New data from the ESA’s Trace Gas Orbiter mission, published in the journal Nature Astronomy, has shed light on the subtle mechanisms behind the loss of water to space.

Martian water has a very specific chemical composition. There are different “isotopes” of water – in the semiheavy water HDO, a hydrogen atom can be replaced by an atom of deuterium (D). (This is twice as heavy as hydrogen because it has a particle called a neutron in addition to the proton in its nucleus.) Measurements stretching back to the 1980s reveal that water on Mars has a relative concentration of deuterium six times greater than that on Earth. This is interpreted as the result of the loss of hydrogen, gradually leaving behind the heavier isotopes.

By extrapolation, the initial amount of water on Mars must have been at least six times greater than it is now, equivalent to a liquid layer of about 100 metres thick covering the planet. This shows how crucial the semiheavy water ratio is to understand Mars’ youth and to shed light on the hypothesis that it once had a warm and wet climate, a prerequisite for habitability.

These results from the Trace Gas Orbiter tell us how water and semiheavy water in the lower atmosphere reach the upper atmosphere and break down into atoms that can escape to space. In particular, it tells us more about the intermediate processes by which hydrogen and deuterium enter the exosphere.

For the past 20 years, two theories have suggested that hydrogen and deuterium cannot reach the exosphere in the proportions they do in lower atmospheric water molecules. The intermediate processes that could enable it, however, are condensation (water vapour turning into liquid water), which forms Martian water ice clouds, and photolysis, which breaks up the water molecule and releases a hydrogen or deuterium atom under the action of UV light.

What our recent study reveals is that condensation actually plays a minor role in the deuterium content of the exosphere. Thanks to the Trace Gas Orbiter’s Atmospheric Chemistry Suite instrument and its simultaneous measurements of H20 and HDO, we were able to show where the hydrogen and deuterium atoms come from. That’s particularly important given that it is at an altitude and time of year on Mars where condensation has no opportunity to interfere with photolysis.

It turns out that photolysis is the dominating process: it produces the bulk of the atoms and dictates the isotopic fractionation of the hydrogen atoms that escape from the Martian upper atmosphere.

This new understanding of the processes that lead to the loss of water to space is a key milestone in attempts to trace the history of water on Mars. Only the Trace Gas Orbiter satellite is able to reveal the joint concentrations of H20 and HDO. But the NASA satellite MAVEN is able to observe and characterise hydrogen and deuterium populations in the exosphere.

The concomitance of these two missions is bringing to life a new line of research. It may allow scientists to describe the complete path of water on Mars – from the lower atmosphere to the very upper atmosphere and into space. Only a detailed understanding of this pathway will allow scientists to develop reliable scenarios for the history of water over the last few billion years, and to corroborate the past habitability of Mars.