Why the Third Taiwan Crisis Was a Brutal Lesson for China 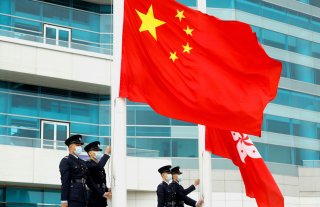 Here’s What You Need to Remember: More than twenty years ago, a military confrontation in East Asia pushed the United States and China uncomfortably close to conflict. Largely unknown in America, the event made a lasting impression on China, especially Chinese military planners. The Third Taiwan Crisis, as historians call it, was China’s introduction to the power and flexibility of the aircraft carrier, something it obsesses about to this day.

In August 1995, China announced a series of missile exercises in the East China Sea. Although the exercises weren’t unusual, their announcement was, and there was speculation that this was the beginning of an intimidation campaign by China, both as retaliation against the Cornell visit and intimidation of Taiwan’s electorate ahead of the next year’s elections. The exercises involved the People’s Liberation Army’s Second Artillery Corps (now the PLA Rocket Forces) and the redeployment of Chinese F-7 fighters (China’s version of the MiG-21 Fishbed fighter) 250 miles from Taiwan. Also, in a move that would sound very familiar in 2017, up to one hundred Chinese civilian fishing boats entered territorial waters around the Taiwanese island of Matsu, just off the coast of the mainland.

In March 1996, China announced its fourth major military exercise since the Cornell visit. The country’s military announced a series of missile test zones off the Chinese coastline, which also put the missiles in the approximate direction of Taiwan. In reality, China fired three missiles, two of which splashed down just thirty miles from the Taiwanese capital of Taipei and one of which splashed down thirty-five miles from Kaohsiung. Together, the two cities handled most of the country’s commercial shipping traffic. For an export-driven country like Taiwan, the missile launches seemed like an ominous shot across the country’s economic bow.

After the missile tests, the carrier USS Nimitz left the Persian Gulf region and raced back to the western Pacific. This was an even more powerful carrier battle group, consisting of the Aegis cruiser Port Royal, guided-missile destroyers Oldendorf and Callaghan (which would later be transferred to the Taiwanese Navy), guided-missile frigate USS Ford, and nuclear attack submarine USS Portsmouth. Nimitz and its escorts took up station in the Philippine Sea, ready to assist Independence. Contrary to popular belief, neither carrier actually entered the Taiwan Strait.

At the same time, the Second Artillery Corps leveraged its expertise in long-range rockets to create the DF-21D anti-ship ballistic missile. The DF-21 has obvious applications against large capital ships, such as aircraft carriers, and in a future crisis could force the U.S. Navy to operate eight to nine hundred miles off Taiwan and the rest of the so-called “First Island Chain.”

Kyle Mizokami is a defense and national-security writer based in San Francisco who has appeared in the Diplomat, Foreign Policy, War is Boring and the Daily Beast. In 2009, he cofounded the defense and security blog Japan Security Watch. You can follow him on Twitter: @KyleMizokami. This appeared earlier in 2017.