Why Trump And Biden Are Fighting Hard To Win Wisconsin 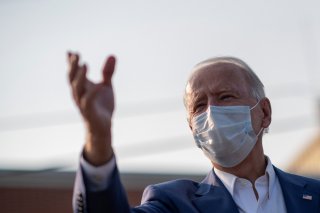 Winning Wisconsin is key to Donald Trump’s re-election. In 2016, he secured an upset win in the state by a margin of less than 1%, which was critical in helping him cobble together an electoral college majority. In 2020, both the Democrats and Republicans view winning Wisconsin as vital to victory and the state is being hit with a blizzard of political messaging, in the form of conventional advertising and social media campaigning.

To understand how political campaigning works in Wisconsin, it helps to have a sense of the state’s deeply segregated political geography. The two largest counties—inner-city Milwaukee county, and Dane county containing the capital Madison—vote Democratic in overwhelming numbers.

Outside urban areas, formerly blue rural and regional areas are now solidly red. Trump signs are ubiquitous, and economic issues are much less salient than the cultural touchstones of guns, abortion and immigration. Slogans like ‘No More Bullshit’ are a common sight on flags and garden signs. While the Joe Biden camp has tried to make inroads by emphasising the disastrous consequences of the trade war with China for Wisconsin farmers, its efforts have had little impact.

That means the suburban vote is the key battleground for both parties. The ‘WOW’ counties (Waukesha, Ozaukee and Washington) that surround the city of Milwaukee used to be the beating heart of the Republican party. Local right-wing talk-radio hosts like Charlie Sykes had national influence comparable to that of Alan Jones in Australia.

But the political trajectory of Sykes from Republican firebrand to never-Trumper following the 2016 election has been mirrored in the suburban belt he once held sway over. The narrow electoral loss of three-time Governor Scott Walker in 2018 showed that this once reliable red wall was cracking, and the suburbs were up for grabs.

The various messages that are blanketing Wisconsin are all about winning the suburbs and getting out or suppressing the vote, through both ‘surface’ and ‘subterranean’ efforts.

The surface campaign consists of the ads that you see on TV or highly trafficked websites, and it is designed with suburban voters in mind.

An enormous fundraising advantage has allowed Biden to plaster Wisconsin with positive messages. His ads tend to focus on his plans for office, with only glancing critiques of Trump’s pandemic performance.

There has also been a strong effort to push Biden’s working-class roots. In one ad, pictures of his childhood in Scranton, Pennsylvania, are juxtaposed with images of him visiting factory workers as vice president. More recently, there’s been an emphasis on reassuring voters that Biden condemns violence and looting. This frequently manifests as clips of Biden’s speeches cut into TV ads or YouTube commercials.

Trump’s ads enthusiastically embrace the negative. The ad ‘You won’t be safe in Joe Biden’s America’ has got a lot of airplay recently. It’s notable for the focus on ‘the radical left-wing mob’, using Antifa militants as its bête noire since Biden himself doesn’t fit that description.

But focusing on these surface messages tells only part of the story. Much of the campaign is being played out below the surface, in digital messaging that uses data-profiling to target specific groups of potentially movable voters. With the potential for more precise targeting, this subterranean campaign is being waged all over the state.

Most of this subterranean messaging takes place on open platforms like Twitter and public Facebook groups, with a smaller amount in closed spaces such as private Facebook groups and messaging apps like WhatsApp. Campaigns and issues groups target voters with paid ads, hitting key issues in different states. In Wisconsin, this has often meant healthcare on the left and economic growth on the right.

But there’s also an extensive effort to generate and spread content organically, without explicitly paying platforms for ad space. The majority of this content doesn’t originate with campaigns themselves, but with digital surrogates.

On the left, the most effective organic, unpaid content comes from groups like Occupy Democrats. It consists of anti-Trump memes, rather than actual misinformation or disinformation, and there’s little targeted expressly at Wisconsin.

There’s far more Wisconsin-focused material from the political right, some of which is at least partially organic. Groups like pro-gun advocates calling for armed protests against Covid-related mask mandates, or others opposing business restrictions during the pandemic, include real Wisconsinites with right-leaning beliefs.

But much of the subterranean digital content in Wisconsin is deliberate misinformation or disinformation. Young Mie Kim of the University of Wisconsin—Madison observes that most of the disinformation is focused on boosting right-wing messages.

The dominant themes are purported rioting, Antifa activists and the left’s desire to defund the police. Content often draws on pro-gun messaging, and there’s an extensive pro-police ‘Blue Lives Matter’ subculture—one it appears 17-year-old Kyle Rittenhouse was immersed in before driving to Kenosha in southeastern Wisconsin and shooting two innocent protestors in August.

Since then, the law-and-order theme has morphed into active pro-Rittenhouse messaging, which has now been taken up by both local Republicans and the Trump administration.

On the Covid-19 front, groups such as Turning Point Action are working around the safeguards Facebook has put in place to inhibit content farms, pushing messages like ‘Don’t trust Dr Fauci’. These groups also help amplify Trump’s attempts to discredit the voting process, falsely asserting mail-in balloting ‘will lead to fraud’.

The digital cult of QAnon, now designated by the FBI as domestic terrorist threat, is another example of a Trump-boosting subculture that thrives on Facebook in Wisconsin, so much so that two Republican candidates in the state are openly running QAnon-supportive campaigns.

The most potent electoral effects of these messages come via the recommendation algorithms of Facebook and YouTube, which make it very easy for those who don’t already hold these views to be drawn into a vortex of right-wing content. This messaging therefore serves the dual purposes of mobilising existing right-leaning voters and reaching audiences that may be otherwise disinclined to vote.

And what about those infamous Russian disinformation operations? Using data from earlier in the election campaign, Professor Kim estimated that at least 20% of all suspicious activity (activity that doesn’t appear to come from a real individual) could be directly traced to Russian groups that US intelligence agencies have confirmed are engaged in misinformation. It’s impossible to be certain exactly how active they are in Wisconsin, but Kim observes that Wisconsin is one of the most targeted states for this type of content.

Russian content is distinguished from other types of disinformation in its efforts to sow division generally rather than to simply boost right-wing messages. Kim notes that the primary target of division is racial tension, citing two Russian-run Instagram accounts focused on Wisconsin—one targeting police with a law-and-order message, and the other focused on African Americans and critiquing police violence.

That said, Russian activity in America broadly has also served to smear Biden and denigrate postal voting. Spreading misinformation can be as simple as just amplifying the president’s tweets. Chinese efforts to interfere in the US information arena have also been uncovered, though most such campaigns are focused not on the election but on issues like the South China Sea.

It’s too early to tell how the chaotic events of the past week—the race to replace of Justice Ruth Bader Ginsburg, the widely panned first presidential debate, and the White House becoming a Covid-19 hotspot—will affect surface or subterranean messaging campaigns.

Biden currently leads Trump by 7% in Wisconsin, which will encourage desperate Republican efforts to narrow that margin in coming weeks. The broad contours of this race for the state appear set: a TV-driven fight for the suburbs where Biden outspends Trump, ringed by a furious storm of conspiracy and misinformation that seeks to rouse and radicalise any latent right-leaning voters through fear.

Ben Power holds a PhD in political science from the University of Wisconsin—Madison.