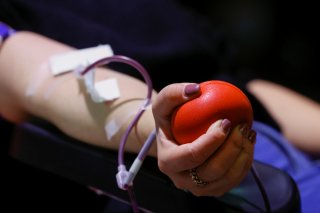 It can not be underestimated just how important blood is for effective healthcare provision. Of the numerous treatments people rely on for their wellbeing, blood is critical for as many as 22 different treatments, including surgery, child-birth, emergencies, end-of-life care, and treatments for various diseases.

To meet this need, 5,000 daily donations are needed from blood donors in the UK. The target is achieved through a small number of generous blood donors (approximately 3-4% of the eligible population donates blood at any one time).

But as well as retaining existing regular donors, there is an ongoing need to recruit new ones. Analysis suggests that there could be potential shortfalls in blood because of increasing demand from an ageing population and a reduction in the number of young donors.

Expanding the number of potential blood donors to groups who have historically been deferred – such as men who have sex with men (MSM) – will not only create a fairer and more inclusive blood donation system but also help to address demand.

The current position: who can give blood?

In an important move away from the current three-month deferral on MSM giving blood, new rules due to come into play this summer will allow MSM who have had the same partner for three months or more to give blood. MSM are currently deferred from donating blood unless they have abstained from sex for three months (down from 12 months in 2017 ).

While the UK transfusion services were the first in the world to move to a three-month deferral from 12 months, the rules have historically been perceived as unfair. People have argued that it is the behaviours that people engage in, irrespective of gender and sexuality, that should be the focus of decisions to defer potential donors.

Though the initial relaxation of rules, to a three-month deferral, was a big step forward, the Department of Health and Social Care requested yet more progress: a selection approach based on the sexual behaviour of donors (rather than the sex of their partner). As such, the FAIR (For the Assessment of Individual Risk) steering group was set up by the UKFORUM (which represents the four UK transfusion services).

With a focus on individuals’ sexual behaviour, the group’s aim was to assess risks to the safety of the blood supply. It was also tasked with identifying key questions to ask donors with the aim of making recommendations to the government about changing the rules on blood donation.

System based on behaviour, not sexuality

The epidemiology team was comprised of Dr Su Brailsford (chair of the FAIR Steering group), Katy Davison, Claire Reynolds and Joe Flannagan from NHS Blood and Transplant and Public Health England. Together, they considered evidence on the objective risk of blood-borne infection from different sexual behaviours, infection rates in the UK and the sexual behaviour of blood donors.

The behavioural science work was led by the team at the School of Psychology, University of Nottingham: myself, Dr Claire Lawrence (now at Lawrence PsychAdvisory), Dr Naomi Pierce and Erin Dawe-Lane (now at Kings College London).

We also looked at whether sexual behaviours are reported reliably in general, and perceptions of risk to patient safety when donors are selected based on sexual behaviour. These questions were considered among the non-donors, blood donors, MSM, donor staff and patients.

By gathering this data, we were able to identify a set of gender-neutral questions that were perceived as acceptable to ask, unlikely to deter donors, and were associated with both a higher objective and subjective risk of infection.

These questions about sexual behaviour will be asked of every person volunteering to give blood when the new rules come into force in the summer of 2021. Participants in the research also considered the proposed changes to be fair, thought they were needed and were a potential way to encourage more new donors. They were considered unlikely to increase risk to patients.

Evidence and recommendations for a new approach were presented to the government’s Advisory Committee on the Safety of Blood, Tissues and Organs (SaBTO) for evaluation on October 2020. They were subsequently accepted by the Department of Health and Social Care in December 2020.

UK transfusion services are world-leading in being the first to take an approach based on the sexual behaviour of all donors. Other countries including the US, Canada and New Zealand are also considering a similar shift in their rules.

Relaxing the rules is a major step forward towards creating a fair blood donor system for all and we are very proud of this achievement and our involvement in it. The power of the FAIR project to provide evidence to support this landmark change lay in part in combining epidemiology, behavioural science and engaging wider stakeholder groups. Other countries that wish to support similar change may also now adopt such an approach.