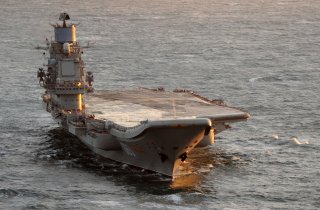 Here's What You Need To Remember: “Russia will be doing NATO and the U.S. Navy a huge favor if it decides to spend the money, repair-yard time, and human capital needed to overhaul the ski-jump-ramp carrier that is clearly an albatross of the Cold War era.”

The Russian navy plans to dry-dock its only aircraft carrier Admiral Kuznetsov in 2020 and conduct extensive repairs on the aging, unreliable vessel.

The plan makes a perverse kind of sense from Moscow’s point of view. But it’s still a bad idea, two experts explained in Proceedings, the professional journal of the U.S. Naval Institute.

But from the perspective of utility to current Russian navy strategy, “Kuzya” is a huge resource sump that will never offer as much value as several Yasen-class fast attack submarines or a squadron of small, lethal missile patrol boats.

She has never performed her original mission of extending Russia’s defensive perimeter, nor has she been a reliable power projection platform. The ship has suffered her share of power plant, hull, aircraft launch and recovery, electrical and mechanical problems and is expensive to man and maintain.

Kuznetsov commissioned in 1990. Problems plagued the ship from the beginning. One of Kuznetsov’s major weaknesses is her lack of catapults for launching her fighters. Another is her powerplant. The vessel is powered by steam turbines and turbo-pressurized boilers that Defense Industry Daily generously described as “defective.”