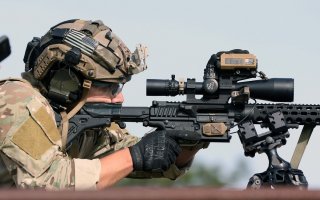 In March, the U.S. Army awarded a close to $50 million contract for a new sniper rifle.

More specifically, the Army awarded Barret Firearms Manufacturing Inc., a $49.9 million, five-year contract for the MK22 Multi-role Adaptive Design (MRAD), which has been chosen as the new long-range rifle for the Army.

This isn’t the first time that the MRAD rifle has hit the news lately. In January, the Army’s Program Executive Officer Soldier (PEO Soldier) came out and announced the decision to replace the Army’s existing sniper rifle arsenal with the MK22 MRAD. Now, the Army has awarded the long-awaited contract.

The Army plans to use the MRAD rifle to replace the M2010 Enhanced Sniper Rifle and the M107 0.50 Caliber Long Range Sniper Rifle.

But the Marine Corps is also interested in the MRAD and plans to purchase approximately 250 rifles in order to replace all bolt-action sniper rifles, such as the M40, a Vietnam War veteran, in its arsenal.

To be sure, the acquisition of the MRAD has been a lengthy process. First requested by and developed for the US Special Operations Command (SOCOM), the MRAD program started in 2016. SOCOM wanted to upgrade its sniper rifle arsenal through the Advanced Sniper Rifle program. At some point, the Army and Marine Corps saw the value of the MRAD and joined the program.

The military and Barrett go a long way back. The gun manufacturer began selling sniper rifles to the US military in the 1980s and has since then sold several models, including the M82, M95, M99, and M107.

This first appeared on Sandboxx.us in April 2021 and is being republished due to reader interest.