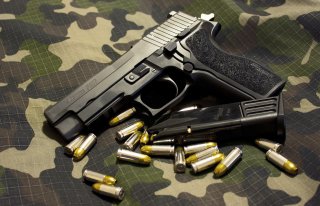 Here's What You Need To Remember: In the competition between the Beretta 92 SB-F and Sig Sauer P226, both rated very well, and a gun owner and enthusiast can justify buying either firearm. The lesson here, however, is that when large inventories of guns are involved, minor statistical differences can have a noticeable effect.

In January 1985, the United States Army selected the Beretta Model 92 SB-F as the new service handgun for the U.S. Armed Forces. In a contract for 450,000 pistols, the Italian gun manufacturer would supply the nine-millimeter firearm to the Army, Navy, Air Force, Marine Corps, and even the Coast Guard. The contentious competition dragged on for the better part of a decade, but doubts lingered in the minds of many. Had the Army picked the right handgun, and should the contract have gone to the Sig Sauer P226?

By the late 1970s, the U.S. Military's handgun inventory was best described as aging and fragmented. The bulk of handguns in Pentagon service were Colt M1911A1 pistols in .45 ACP dating to World War II and lacking modern features, such as a high capacity magazine and ease of disassembly, while the Air Force relied on worn-out Smith & Wesson handguns bought in the 1960s.

Established in 1979, the Joint Service Small Arms Program (JSSAP) set out to select a single handgun for all the armed services. The program drafted up a raft of requirements, including the ability to fire nine-millimeter Luger rounds, the NATO standard for pistol ammunition, a minimum fifteen round magazine capacity, and an expected service life of 10,000 rounds. The contestants, including Beretta’s 92 SB-F pistol and SACO Defense’s (later Sig Sauer's) P226, with the 1911A1 acting as a control.

Bureaucratic bickering led to two trials, in 1981 and 1984. To no one's surprise the 1911A1 came out worst, but the P226 led in many categories, particularly reliability. The Beretta 92 SB-F was competitive with the P226 but did not significantly test better than the Swiss-German handgun. Later, Beretta and Sig Sauer wound become the two finalists.

The Army eventually picked the Beretta as the winner of the competition, later designed the M9, apparently on cost grounds—the Italian company’s total bid was three million less than their Swiss-German competitors. Beretta cut its price to the “bare bones” price of $178.50, way down from the street price of $600 civilians paid, while Sig Sauer cut from $620 to $176.33. While the Sig was the cheaper handgun, it also quoted higher costs for magazines and spare parts, boosting the overall cost of the acquisition.

Among those units across the U.S. armed forces looking for new handguns were U.S. Navy SEAL teams. SEALs shot tremendous amounts of ammunition to maintain a high level of proficiency and fired high performance, high-pressure ammunition to boot. An incident at the counterterrorism unit Seal Team Six, in which a slide cracked and injured the shooter, uncovered a problem with the slides. The problem was corrected by Beretta, but the SEALs went looking for a new handgun regardless and settled on the P226. By January 1989, the first Sig Sauer handguns were in the hands of SEALs. Although Sig had failed to win the grand prize, the company still received a fairly prestigious consolation prize.

The difference between the Sig Sauer P226 and Beretta 92 SB-F in a government competition was minimal, so much so that Beretta basically won the competition on a cost basis. However, soldiers would grumble about Berettas for decades, with soldiers in the early 2000s complaining about a lack of reliability. The Army probably thought that the minimal differences in performance meant the decision could be made solely on a cost basis. While fair enough an assumption, use in multiple wars, across three decades, and an arsenal of hundreds of thousands of guns meant that a difference of just a few percentage points would still lead to markedly higher levels of unreliability.

In the competition between the Beretta 92 SB-F and Sig Sauer P226, both rated very well, and a gun owner and enthusiast can justify buying either firearm. The lesson here, however, is that when large inventories of guns are involved, minor statistical differences can have a noticeable effect. For just about the cost of a single Abrams tank the Army could have had a more reliable handgun for the M9's thirty-year run, giving soldiers increased confidence in their handguns.

Kyle Mizokami is a writer based in San Francisco who has appeared in The Diplomat, Foreign Policy, War is Boring and The Daily Beast. In 2009 he co-founded the defense and security blog Japan Security Watch. You can follow him on Twitter: @KyleMizokami. This article first appeared in 2018.