Why U.S. B-1 Bombers are Skirting Around Taiwanese Air Space 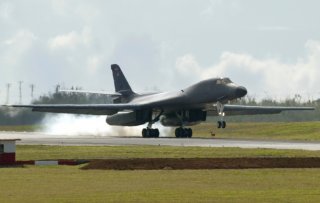 Here's What You Need to Remember: The multi-mission B-1 remains the backbone of America’s long-range bomber force, and the entire fleet of the bombers recently underwent an eight-year-long upgrade as part of the modernization process. It was the largest and most complicated modification performed to date on the B-1 and it gave the flight deck a completely new look.

The skies in the waters around Taiwan have become increasingly crowded in recent weeks, and two U.S. Air Force B-1B Lancer bombers and a Chinese People’s Liberation Army Air Force (PLAAF) reconnaissance aircraft were spotted to the east of the island nation on Friday. PLAAF aircraft have been encroaching on Taiwanese air space over the past month.

The U.S. bombers, which had departed from Andersen Air Force Base (AFB) in Guam, headed northwest on a course for the East China or South China Seas. According to additional reports via social media, two KC-135R Stratotrankers refueled the American bombers during the flight, which was an indication that these were on a long-distance mission.

The flight of the bombers took place on the last day of Valiant Shield 2020, a two-week exercise that involved more than eleven thousand personnel and one hundred aircraft from the U.S. Navy, Air Force, Army and Marines Corps.

The U.S. Air Force’s B-1B Lancers weren’t the only international aircraft in the region last Friday.

Japan’s Ministry of Defense (MOD) reported that a Chinese Shaanxi Y-9 reconnaissance aircraft was also spotted in the East China Sea heading in a southwesterly direction. The “spy plane” crossed the Miyako Strait before turning west, where it then headed toward the eastern sector of Taiwan’s air defense identification zone (ADIZ) off the coast of Hualien County. Japanese Air Self-Defense Force (JASDF) fighter jets were scrambled to intercept and escort the Chinese Y-9.

On Monday, a Chinese Shaanxi Y-8 anti-submarine aircraft also encroached on the ADIZ, which forced Taiwan’s Air Force to broadcast a warning for the thirteenth day in a row.

The Taiwanese Ministry of National Defense did not issue a statement on either of the incidents, but it has been noted that Chinese aircraft have increasingly violated Taiwan’s ADIZ in the recent weeks.

B-1B Bomber Back in the Pacific

The Air Force’s B-1B Lancers had only returned to Andersen AFB for Bomber Task Force (BTF) operations on September 10. Four of the Cold War-era bombers from the 34th Expeditionary Bomb Squadron, 28th Bomb Wing, Ellsworth AFB, South Dakota, were deployed to support the training efforts of the Pacific Air Forces working with allies, partners and joint forces, and strategic deterrence missions to reinforce the rules-based international order in the region.

Prior to arriving in Guam, two of the B-1s had integrated with JASDF fighters to conduct escort training in the Sea of Japan.

“This Bomber Task Force deployment, part of the dynamic force employment strategy, showcases our unwavering commitment to security and stability in the Indo-Pacific while also demonstrating our ability to provide combat power anywhere, anytime,” Col. David Doss, the 28th BW commander, said in a statement issued in September.

The B-1B has the largest conventional payload of both guided and unguided weapons in the Air Force inventory. It can rapidly deliver massive quantities of precision and non-precision weapons against any adversary, anywhere in the world, at any time.

The multi-mission B-1 remains the backbone of America’s long-range bomber force, and the entire fleet of the bombers recently underwent an eight-year-long upgrade as part of the modernization process. It was the largest and most complicated modification performed to date on the B-1 and it gave the flight deck a completely new look.