Why U.S. Military Strategy Should Return to the Basics 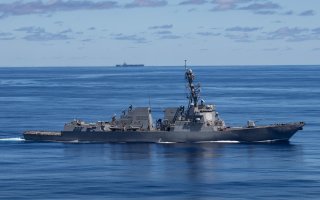 Here's What You Need to Know: The masters of strategy agree: let’s get back to basics.

Nor is it any mystery why the report generated buzz. The commissioners postulate that “Americans could face a decisive military defeat” if the U.S. armed forces tangle with, say, Russia in the Baltic Sea or China in the Taiwan Strait. That’s dark language and marks quite a turnabout from the triumphalism of the post-Cold War years, when Americans talked themselves into believing history had ended in Western triumph underwritten by perpetual U.S. maritime supremacy.

But it’s also accurate language, and has been for some time. Think about the algebra of Eurasian warfare. Likely contingencies would pit a fraction of U.S. forces against the concentrated military might of Russia in the Baltic or China in the Taiwan Strait. The same would go for other hotspots. Decisive defeat is always a possibility when part of one force squares off against the whole of another on the latter’s home turf.

Welcome Back to History

Congress charged the commission with critiquing the 2018 National Defense Strategy, the Trump Pentagon’s most authoritative statement of how it saw the world and intended to manage it. To me the report’s most acute criticism involves fudge factors. Admiral J. C. Wylie observes that lawmakers make strategic decisions through the budgetary process all the time. Hence it behooves national security professionals to explain the repercussions of such decisions for martial undertakings.

In so doing they bolster the likelihood of sound decisions. By fixing the overall budget or allocating funding to some priorities—and, strategy being the art of setting and enforcing priorities, neglecting others—Congress could cap or deform U.S. military effectiveness in certain contingencies. Wrongfoot the armed forces and they may fail to attain the tactical, operational, or strategic goals assigned to them. Fail to achieve those goals and America has suffered a defeat—perhaps a decisive one if the foe gets everything it wants.

Decisive defeat need not mean losing the force in an afternoon (although that does seem to be what the commissioners mean). Yet one contender need not annihilate another’s armed force to score a decisive victory. Even Carl von Clausewitz defines “destruction” as destroying the enemy force as a fighting force, not necessarily as wreaking physical destruction. In theory, every enemy soldier, airman, or sailor could survive an encounter with all of their weaponry intact and still could have suffered catastrophe.

Not every decisive battle or campaign need be a Trafalgar, Tsushima, or Leyte Gulf, an engagement that inflicts wholesale human and material destruction on one of the antagonists. Strategic and political results are what distinguish victory from defeat.

Back to fudge factors, lawmakers may restrict budgets—and thus military options—while administration officials decline to slacken demands on the force. As a result, it’s natural for the Pentagon and service magnates to try to accomplish the goals they’re given with the manpower and taxpayer resources supplied to them. They approach with a can-do spirit.

This has pitfalls. Though not in so many words, the commissioners take the framers of the National Defense Strategy to task for fudging in hopes that the armed services can fulfill all assigned missions with inadequate resources. For instance, they find the strategy’s emphasis on “dynamic force employment” to be “imprecise and unpersuasive.” It appears to mean “creating efficiencies within the force and decreasing the need to expand force structure by having a single asset perform multiple missions in different theaters on a near-simultaneous basis.”

If so, this is indeed a troubling sign. Wringing new efficiencies out of existing budgets and force structure to fund operations or hardware acquisitions is a staple of defense debates. It looks like conjuring new resources out of thin air. Seldom, however, do such economies yield the windfalls advertised for them. And if dynamic force employment means shifting forces constantly from theater to theater, it may be a throwback to the 1970s, when overseers of the shrunken and “hollow” post-Vietnam force foresaw “swinging” naval forces from Pacific to Atlantic in times of war.

That’s a precedent America should reject with all its might. Eliminating the need to swing forces from side to side on the map constituted a major part of the rationale impelling the Reagan administration’s defense buildup in the 1980s. Again: one hopes the National Defense Strategy isn’t taking us back to the groovy 1970s. Disco is dead. Let swinging stay buried next to it.

I confess my favorite part of Providing for the Common Defense isn’t the consensus text, though. My favorite bit comes from my colleague Andrew Krepinevich in an appendix toward the report’s end. (Krepinevich and I are island-chain defenders of long standing.) If the commissioners proffer a critique of the National Defense Strategy, Professor Krepinevich critiques the critique. That’s the hallmark of sound analysis and writing. Kudos to the commission for publishing a dissent.

In fact, Andy reprimands his fellow commissioners for the same failings they identify in the National Defense Strategy. He faults them in particular for global, vague, abstract thinking.

In his telling the coauthors revert to “‘capabilities-based’ planning rather than ‘threat-based’ planning.” Capabilities-based planning was long in vogue at the Pentagon after the Cold War, when no peer competitor had appeared on the horizon and none seemed to be in the making. That being the case, U.S. strategists and planners took to imagining what capabilities—a “capability” being “the ability to” do X, Y, or Z—the U.S. armed forces needed to prosecute a generic contingency in a generic setting against a generic foe to be named later. Then the services built those capabilities and trusted that they would fit real-life situations.

By contrast, threat-based planning designates a prospective opponent and theater of conflict and gears planning and force design to foreseeable contingencies involving that opponent in that theater. Naming an enemy has its hazards from a diplomatic standpoint; from a military standpoint it’s valuable beyond measure. It situates capabilities in real settings. It’s concrete and actionable compared to capabilities-based planning. And it supplies a benchmark against which to measure U.S. tactical and operational efficacy.

It Connects Plans and Forces with Reality

And it helps ward off bad habits. We often caution Naval War College students against “script-writing” in strategy. That’s the fallacy of choreographing a strategy and supporting operations, often in minute detail, and expecting hostile actors to play the parts the choreographers set forth for them. It’s one thing for Hollywood screenwriters to script out events; they pay the actors and can expect them to comply with instructions. Not so in armed strife.

Moreover, script-writing has a way of locking friendly commanders or officialdom into a particular doctrine for doing things. Which is fine except it ignores the fact that some characters listed in the dramatis personae—meaning foes—have every interest in spoiling our script.

Accordingly, it’s high time to get back to judging ourselves against real competitors. As Krepinevich notes, “it is now possible to identify the character of major threats to our security with far greater clarity” than it was during the heyday of capabilities-based planning. As Clausewitz might put it, we can now envision the “nature of the war” and venture some net assessment of the surroundings and likely combatants. We now brandish a yardstick.

That may mean it’s inadvisable or impossible to come up with a one-size-fits-all force design to suit all theaters against all adversaries at all times. Carrier task forces may remain the right implement for waging war in the North Atlantic, for example. The Pentagon seems to think so in light of the USS Harry S. Truman strike group’s recent deployment for exercises in northern climes. It certainly feels like the 1980s are back in the strategic competition against Russia.

But traditional formations may not be the right tool elsewhere. A force skewed more toward light surface combatants, a mix of diesel and conventional submarines, and land-based air and missile forces might be the optimal instrument against China. If the strategic goal is to confine Chinese air and sea forces within the China seas, nontraditional forces might close the straits while aircraft carriers and other high-end combatants play the role of supporting mobile forces in the Western Pacific—behind the island chain. In a sense, the battle fleet as usually construed would take a back seat to lesser forces that are better suited to the job.

Bottom line, it’s time to get specific about dreaming up and wargaming real-world scenarios and designing capabilities around them.

Krepinevich closes by proposing a series of big-think capabilities that sound as though they could have been drafted by Julian Corbett, the English marine historian of the turn of the century. Corbett maintains that a maritime hegemon can wage limited war in distant theaters if it can accomplish three goals: assure seaborne access to the theater, isolate the geographic object from the sea, and safeguard its homeland from an “unlimited” counterattack—meaning an enemy effort at regime change from afar. For instance, unseating the government in Washington could settle matters in favor of Moscow or Beijing without major combat on the scene.