Why the U.S. Navy Cannot Wait to Deploy the Columbia-Class Submarine 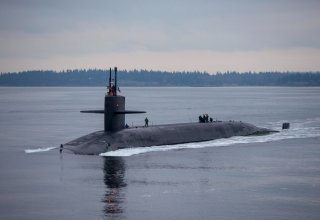 Here's What You Need to Remember: The Columbia’s are also needed quickly, it would seem likely, in part because they are being engineered as much more capable, high-tech, lethal, and stealthy when compared with the existing Ohio-class. This would appear necessary given the sheer numbers of rival nation threats, to include submarines, long-range, sub-launched nuclear missiles, ICBMs, and air-dropped weapons.

The U.S. Navy is calling its fast-tracked, high-speed acquisition of the new Columbia-class, nuclear-armed ballistic missile submarines its “top acquisition priority,” reflecting upon and emphasizing what has been a longstanding effort to develop, fund, and build the new generation of platforms, intended to quietly patrol the undersea domain, ensuring a catastrophic second-strike capability in the event that the U.S. is suddenly subjected to a nuclear attack.

The Navy plans to deliver its first newly built Columbia-class submarine by 2028, in preparation for its first patrol in the early 2030s. The program continues to take on new urgency given the pace at which Russia and China are building new nuclear weapons. The existing fleet of Ohio-class boats has already served years beyond what was originally intended.

“Ohio-class boats are nearing the end of four decades of service and must be replaced, making the Columbia-class program our top acquisition priority,” the recently released Chief of Naval Operations CNO NAVPLAN states.

The new document, authored by CNO Adm. Michael Gilday, highlights the significance of next-generation strategic deterrence as a key element of a broader service expansion into a larger, hybrid fleet of platforms to include drones, submarines, surface ships, and small boats.

“As we build a larger, hybrid fleet, we are determined to deliver the Columbia-class submarines on time. Our ballistic missile submarines provide an assured response to any strategic nuclear attack on the United States,” Gilday writes.

Interestingly, while the service’s current acquisition goal is to buy 12 new Columbia-class submarines, the Navy could wind up adding more, given the severity of the threat environment. The first several boats are already under contract and under construction, a process expected to grow even more efficient as production progresses over time. The Navy plans to build 12 new ballistic submarines to replace the current fleet of 14 Ohio-class boats because the Columbia class is being built with a “life-of-core” nuclear reactor and will not need to dry dock for mid-year refueling. This will enable longer, more continuous service functionality.

The Columbia’s are also needed quickly, it would seem likely, in part because they are being engineered as much more capable, high-tech, lethal, and stealthy when compared with the existing Ohio-class. This would appear necessary given the sheer numbers of rival nation threats, to include submarines, long-range, sub-launched nuclear missiles, ICBMs, and air-dropped weapons. A strong presence of nuclear-armed ballistic missile submarines can quietly patrol the undersea domain, secretly ensuring complete destruction of any nation which launches a nuclear attack upon the U.S.

The concept is clear: ensure catastrophic annihilation with nuclear weapons, to keep the peace.