Why the U.S. Shouldn't Rely on Fancy Equipment to Beat China In a War 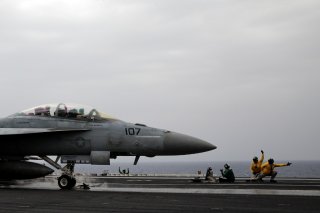 Here's What You Need to Remember: But by the same token certain mundane capabilities should rank high in the pecking order—and so must the humdrum platforms deployed to carry out missions deriving from those capabilities. Some everyday capabilities act as enablers, helping glamour platforms fulfill their potential. Others advance strategic purposes in their own right.

Seafaring folk, including yours truly, have a habit of falling in love with glitzy armaments and platforms such as aircraft carriers, stealth fighters, and destroyers festooned with sensors and missiles. The reasoning goes something like this: frontline vessels and aircraft do battle for command of sea and sky. Without them the U.S. Navy and Marine Corps may never win command. And if they cannot win command they cannot leverage command for operational and strategic effect. The sea becomes a bulwark against U.S. and allied strategy rather than an avenue into embattled zones. Maritime strategy falters.

By that logic it follows that top-end hardware should hold pride of place in budgetary deliberations and fleet design. The services should procure lesser implements on a not-to-interfere basis with capital ships. They should forego acquisitions of, say, unglamorous diesel attack submarines for fear of siphoning finite shipbuilding resources from nuclear-powered attack boats.

But there’s more to it than objective reckoning of priorities. A majesty and allure enshrouds major platforms beyond their strictly military value. They conjure up affection, and affection colors debates over force structure and strategy. Heck, sailors live on board our ships. Ships become home—and home is where the heart is. Or as strategist Edward Luttwak maintains, aircraft carriers, destroyers, and nuclear submarines exude “sex appeal.” Hence the throngs of visitors that descend on New York, San Francisco, and other seaports during Fleet Week. Mariners must disentangle the passions they feel toward their platforms from cool calculation if they hope to design fleets fit to execute strategy.

A prime way to do that is to distinguish between “platforms” and “capabilities,” undertaking the basic linguistic hygiene beloved of thinkers from Confucius to George Orwell. Naming things with precision cleanses the language used in debates over fleet design and in turn makes for dispassionate analysis. I seldom have much use for joint publications, but in this case the definition of capability put forth in the Defense Department Dictionary of Military and Associated Terms illuminates. A capability, says the dictionary, is not a whizbang. It is “the ability to complete a task or execute a course of action under specified conditions and level of performance.” It’s the ability to do a job—not the tool used to do it.