Why We Need to Modernize Congress 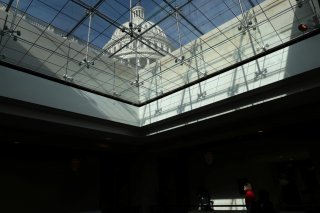 Presidents make war without congressional involvement. The declare “emergencies” with Congress’s permission, “repurposing” monies for projects did not authorize. The Constitution vests in Congress the power “to regulate commerce with foreign nations,” but Congress has vested presidents with the power to utter “national security,” thereby justifying, on metal imports from Canada, a military ally. And on washing machines. Really. And the power to disburse billions to compensate farmers for injuries a president inflicts by initiating a trade war. Congress thinks it is setting immigration policy, but presidents can substantially alter it by invoking “enforcement discretion.” The Congressional Budget and Impoundment Control Act of 1974 requires Congress to pass a budget resolution by April 15, but it rarely does … Sixty‐​four percent of members of the 116th Congress have never served under a regular budget and appropriations process.

Hear, hear! These are the same criticisms we’ve been leveling at Congress. In The Case for Congressional Regulatory Review, I elaborate on our legislature’s decline, the causes of which are too involved to broach in this post.

Turning back to Will’s column, his ultimate point was to endorse the recommendations rendered by the bipartisan Select Committee on the Modernization of Congress:

Fortunately, the 116th Congress created the 12‐​member bipartisan Select Committee on the Modernization of Congress. Under Chair Derek Kilmer (D‐​Wash.) and Vice Chair Tom Graves (R‐​Ga.) it produced recommendations that could help Congress attract and retain serious members not given to delegating to the executive branch essentially legislative powers.

Will then singles out certain suggestions, including the Select Committee’s recommendation for Congress to invest in itself:

The size of congressional staff has not kept pace with the growth of congressional business.… . Congress’s parsimony with itself—the cost of Congress is 0.08 percent of the federal budget—has costs. Staff pay has declined relative to the private sector, so institutional memory suffers as the typical staffer leaves after four or five years. House committee staff declined about 50 percent between 1991 and 2015.

Libertarians might give pause to a call for more (and better compensated) congressional staff. As a general matter, we’re suspicious of growing government. But I think such skepticism is misplaced. There is a hidden cost to an underfunded Congress—namely, our constitutional system loses a check on growing executive power. As Zach Graves explained as part of the Federalist Society’s Article I Initiative,

Over the past quarter century, committees have lost over 1,000 staff positions, and support agencies have lost over 2,500. Reflecting this capacity loss, sometimes referred to as the “big lobotomy,” Members of Congress can be seen routinely struggling with complex technical issues, and offices have trouble staying on top of their legislative and oversight responsibilities. The end result is that more policy decision making is outsourced to the administrative state, where it is less responsive to democratic forces, and has limited oversight.

Simply put, Congress doesn’t have the tools to oversee the administrative state. This capacity deficit, in turn, facilitates the rise of presidential lawmaking. Without effective congressional oversight, presidents have an easier time pushing the boundaries of executive authority, which is a major reason why our separated powers are so imbalanced at present. And, as Madison explained in Federalist 47, the concentration of power “may justly be pronounced the very definition of tyranny.” The upshot is that building Congress’s oversight capacity can serve the ends of classical liberalism, by balancing power.

Having reflected on the matter, I came up with an idea for how to pay for more and better staff in Congress. Why not fund congressional staff by repurposing fat cut from the budgets of the agencies that lawmakers are supposed to be overseeing?

Based on my cursory investigation, it would seem there are plenty of easy “savings” that could be reinvested in Congress. The EPA, for example, employs 165 public relations specialists, according to a report by the Government Accountability Office. In comparison, the Senate Environment and Public Works Committee—which has jurisdiction over the EPA—employs 34 staffers in all, according to data compiled by the Brookings Institute. This amazing statistic bears repeating: By itself, the EPA’s PR shop employs about five times as many people as the Senate committee charged with overseeing the entire EPA. This allocation of resources makes no sense! Keep in mind that the Senate Committee has other agencies in its jurisdiction, too, so these 34 staffers aren’t dedicated to the EPA.

Beyond the EPA, federal agencies spend billions of dollars on public relations every year. To pay for the modernization of Congress, lawmakers should start with the president’s marketing budget.