Why the World’s Top 5 Arms Sellers are All American 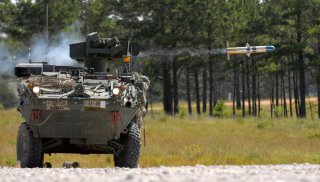 Some will hail it as a triumph of American capitalism. Others will say that it is a bloodstained badge of shame. But either way, the world’s top five arms manufacturers are all American companies.

The top 100 defense companies accounted for $420 billion in 2018, up 4.6 percent from 2017 and 47 higher than in 2002, according to the Stockholm International Peace Research Institute, which publishes a list of the world’s top 100 arms vendors by annual sales.

“The growth in total Top 100 arms sales in 2018 was primarily driven by increases in sales by the highest-ranked companies—specifically the top five companies, all of which are based in the United States,” SIPRI said. “The growth in Top 100 arms sales in 2018 can be correlated to increases in global military expenditure, particularly the rise in U.S. spending from 2017 to 2018.”

U.S. companies were responsible for 59 percent of arms sales among the Top 100. Coming in at number one among global defense companies was Lockheed Martin, with $47.2 billion in arms sales in 2018. A distant second was Boeing at $29.2 billion, followed by Northrop Grumman at $26.2 billion, Raytheon at $23.4 billion and General Dynamics at $22 billion. In sixth place came British defense firm BAE, at $21 billion.

Also noteworthy was that ten Russian companies made the Top 100 list, led by the state-owned Almaz-Antey firm, maker of air defense systems and other weapons. Indeed, Almaz-Antey ranked ninth on the list at $9.6 billion.

“All the Russian companies in the Top 100 are state-owned and are largely dependent on domestic demand,” SIPRI noted. “To reduce the level of this dependence, Russia introduced an initiative in 2016 to diversify its arms companies’ production to include civilian production. The Russian Government’s objective is to bring the share of civilian production of its arms companies’ total sales to at least 17 per cent by 2020 and to 30 percent by 2025. However, it is still too early to assess the impact of this initiative on Russian arms companies.”

Significantly, one nation was notable by its absence from the SIPRI list. Chinese arms makers do not appear on the SIPRI list, though China exports weapons around the world. “Chinese arms-producing companies are not covered by the SIPRI Top 100 because of a lack of data on which to make a reasonable or consistent estimate of arms sales dating back to 2002. Nonetheless, some information is available on several major companies that are part of the mainly state-owned Chinese arms industry.”

“SIPRI estimates that three Chinese arms companies would be ranked in the top 10 of the Top 100 arms-producing and military services companies: AVIC, NORINCO and CETC. Based on the limited information available and taking into account arms exports and the general growth in China’s military spending, at least seven other arms companies would probably be in the Top 100 if figures for arms sales were available.”