Why Xi Jinping Has a Lot in Common With Teddy Roosevelt 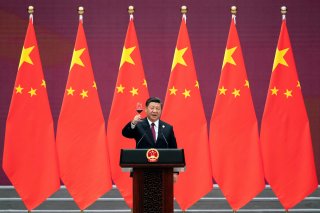 Here's What You Need To Remember: To be sure, the two chief executives had disparate motives for rooting out patronage and graft. Roosevelt seemed interested in good government for its own sake, while Xi is using anti-corruption—at least in part—as a pretext to shore up his own power base. That both statesmen fought for clean government intrigues nonetheless.

Is Xi Jinping China’s Teddy Roosevelt? The very question elicits giggles. A Chinese Communist Party apparatchik could scarcely constitute the second coming of a progressive New York Republican from a century ago. Or could he?

Not in terms of personal background. Differences are legion—even apart from the sociopolitical gulf separating twenty-first-century China from fin de siècle America. For instance, Xi’s career in officialdom got off to a shaky start after his father was purged from his post during the Cultural Revolution. The future president shuttled from post to post within the CCP, amassing credibility on policy and military affairs while scaling the political heights.

Roosevelt enjoyed a relatively cosseted upbringing as the scion of a patrician New York family. Nor, unlike Xi, was he a career party man. He did hold a variety of posts, including New York City police commissioner and assistant secretary of the navy. Like Xi, he served as a governor, overseeing New York state before moving on to the vice presidency and presidency. Interspersed among his public-service posts, however, were stints ranching in the Dakotas and raising a volunteer regiment for the Spanish-American War. And TR established himself as an author of some repute, penning works of history that remain in print to this day.

And so forth. Whatever likenesses there are appear few, coincidental and inconsequential. And yet the life and times of Theodore Roosevelt echo dimly in contemporary China. Both Roosevelt and Xi battled corruption, for example. TR crusaded for good government as U.S. Civil Service commissioner under Presidents Benjamin Harrison and Grover Cleveland. Xi has prosecuted his own anti-corruption campaign since becoming China’s president.

To be sure, the two chief executives had disparate motives for rooting out patronage and graft. Roosevelt seemed interested in good government for its own sake, while Xi is using anti-corruption—at least in part—as a pretext to shore up his own power base. That both statesmen fought for clean government intrigues nonetheless.

Nor is that the only similarity. Roosevelt, like Xi, was a navy president. TR—along with kindred spirits such as Henry Cabot Lodge, William Howard Taft and Alfred Thayer Mahan—wanted to build a U.S. Navy battle fleet capable of ruling waters crucial to the U.S. national interest. With naval mastery came the capacity to safeguard the Caribbean Sea and Gulf of Mexico, the American middle sea whereby shipping would transit between the Atlantic and Pacific oceans once the Panama Canal was completed. It also let Washington defend the Pacific islands wrung from Spain in 1898 (notably the Philippines) or annexed in the afterglow of victory, as in the case of Hawaii.

An ambitious venture? Sure. But not as ambitious as you might think. The exigencies of local supremacy didn’t demand a U.S. Navy larger than any rival navy. Indeed, the mantra before World War I was that the American navy ought to be “second to none” except for Great Britain’s world-straddling Royal Navy. Why settle for second place? Because American strategists believed the U.S. Navy would never meet an adversary’s entire navy in combat in the waters they cared about. It might, however, have to fight that part of a navy a rival could spare for deployment to the Western Hemisphere. That detachment offered a yardstick for sizing and configuring the U.S. Navy.

For reasons that remain mysterious, it escapes many commentators that the measure of an armed force’s adequacy isn’t whether it outnumbers prospective opponents as a whole, or boasts sexier technical specifications on paper. The standard is whether a force can accomplish the tactical and operational goals entrusted to it. It measures up if it can—irrespective of how many whiz-bang platforms make up its inventory. Outright supremacy is nice to have, but oftentimes nonessential.

And indeed, it was nonessential for turn-of-the-century America. The United States had the luxury of concentrating its energies and naval resources on dominating one, nearby, semi-enclosed expanse, whereas its likely competitors—Britain, Germany, maybe France—had to disperse forces to shield their homelands against invasion, face down European rivals,and police empires scattered across Africa, Asia and the oceans and seas between. TR’s America, then, only needed a navy bigger and badder than the contingent—the fraction—of a hostile navy that might stand into American waters. Even big-navy enthusiasts like Roosevelt saw little need to invest in excess capacity.

Think about the potential blowback a European great power would risk, should it concentrate its fleet in the Caribbean. London would leave far-flung holdings such as India—the jewel in its crown of empires—or Singapore or Hong Kong unguarded, should it dispatch most or all of the Royal Navy to the Caribbean. Why take such a chance? American navalists saw little reason to think British leaders would. Still less could Imperial Germany or some other lesser foe spare the bulk of its fleet for American service.

Mahan, consequently, estimated that a fleet of twenty armored battleships was enough to “take the sea, and to fight, with reasonable chances of success, the largest force likely to be brought against it.” Why should the U.S. Navy lay down more hulls than it needed to outmatch opponents where and when it mattered?

Congress and the Roosevelt administration evidently agreed. The U.S. Navy battle fleet numbered twenty battlewagons in 1907-1909, when TR dispatched the “Great White Fleet” to circumnavigate the globe. (Sixteen made the voyage, while four remained behind for upkeep.) For the sake of comparison, the Royal Navy’s inventory included sixty-two battlewagons in 1908, while German shipfitters were building toward a fleet of forty-one. (The German Navy never reached that figure.) Only during World War I, when Congress enacted a massive naval-expansion law, did the United States set out to field a navy “second to none,” full stop.

Like his American forebear, Xi Jinping has fixed his strategic gaze on the waters that count most for China. Shortly after assuming office two years ago, Xi embraced the ongoing effort to build China into a maritime power. He, too, appears content with a navy second to none but the reigning global navy—and for reasons similar to those that impelled Roosevelt. To wit, Beijing wants first and foremost to make itself the dominant power in the “near seas” within the first island chain—just as TR’s America coveted preeminence in its own near seas.

From a technological standpoint, Xi’s navy enjoys advantages of which American seafarers could only dream. Namely, the near seas lie within reach of shore-based missiles and aircraft. That means the People’s Liberation Army Navy (PLAN) can count on fire support even before its fleet fully matures.

Fire support, then, is China’s great equalizer. In Mahanian lingo, this terrestrial adjunct to Chinese sea power bolsters the PLAN’s capacity to take to the sea and fight the largest detachment the United States or its allies are likely to station in China’s environs. Xi, like TR, appears to grasp the logic of local supremacy. A navy second to none—should China’s leadership desire such a thing—can wait until the PLA is strong enough to manage events within the island chain. First things first.

Unlike Roosevelt, admittedly, China’s president is evidently operating on a timetable. TR’s vision of American sea power seemed open-ended. The United States, he vouchsafed, was becoming “the balance of power of the whole world.” Acting as balancer is a never-ending vocation. By contrast, PLAN founding father Admiral Liu Huaqing implored the CCP establishment to take charge of the Western Pacific, then put to sea a global navy by mid-century. By choice or happenstance, Liu’s strategic vision aligns nicely with the centennial of Communist China’s founding in 1949. The centennial promises to be quite a spectacle judging from the words already issuing from Beijing. The navy will play its part.

As in so many endeavors, then, China is a nation in a hurry as it quests for local mastery of the sea. But for what purposes will it deploy sea power? Here again, echoes from the age of Roosevelt are audible. Rising powers typically deploy armed might to assert some control of their surroundings. Their leaders tend to take a proprietary view of those surroundings.

President Roosevelt was no exception. In 1904, he put his own gloss on the Monroe Doctrine, the hands-off foreign-policy doctrine first enunciated in 1823. In 1895, the Grover Cleveland administration had reinterpreted James Monroe’s precepts as a virtual writ for American suzerainty over the Western Hemisphere. Secretary of State Richard Olney went so far as to proclaim that the United States’ “fiat is law” in any controversy Washington decided to make its business. The republic’s physical might and moral standing, vouchsafed Olney, made it the natural arbiter of international disputes in the Americas.

Over-the-top rhetoric notwithstanding, Cleveland and Olney chiefly wanted to mediate a border dispute roiling South America. Gold had been discovered along the poorly demarcated frontier between British Guiana and Venezuela. War loomed between Britain and Venezuela over the formerly worthless strip of borderland. Helping keep the peace only made sense from the American vantage point. Even so, TR believed Cleveland had gone too far in declaring that the United States reserved the right—as a general principle—to impose its will throughout an entire hemisphere.