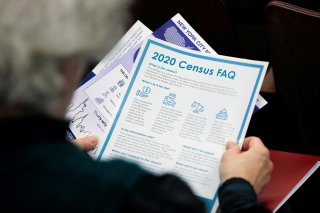 In April of this year, AEI held an event to discuss City University of New York Professor Richard Alba’s book, The Great Demographic Illusion: Majority, Minority, and the Expanding American Mainstream. He was joined by other experts on the Census. Revisiting the discussion is especially useful given the release of the 2020 Census data last week.

Alba began his presentation suggesting that the popular “majority-minority” theme so common in the media divides us by suggesting our society is split in two, “with one side gaining and one losing.” This, he believes, does not accurately describe the American demographic landscape. By adding new lines to the Census form, and also making improvements in data processing and coding, the Census has improved our understanding, and the new reality is becoming clearer.

Alba argues that the majority-minority narrative collides with a trend that hasn’t gotten as much attention. It is the rising frequency of families that span the major ethno-racial divide between whites and people of color. He cited the Pew Research Center’s work on intermarriage that provides one indication of the mixing in families. One-fifth of new marriages unite partners of different ethno-racial categories. As a result, a new group is emerging and growing; that is, young Americans who come from mixed ethno-racial families. We can learn a lot about this group from data on birth certificates where parents can indicate multiracial identities for their children. In 2017, Alba says, mixed infants made up 14 percent of all births. He also points out that new racial identities are much more fluid with people describing their identity in different ways on different forms, for example. This could lead, he believes, not to the disappearance of distinctions, but rather to their decline, remaking the American mainstream.

An indication of the big change in the overall demographic picture came from the Census releases last week. In 2020, “the percentage of people who reported multiple races changed more than all of the race alone groups, increasing from 2.9 percent of the population (9 million people) in 2010 to 10.2 percent of the population (33.8 million people) in 2020.” That’s a 276 percent increase. We’re learning a lot more about who we are from the work Alba and others have done. While the number of states with majority minority populations has grown since 2010, it isn’t a full picture of America’s complex demography.

Karlyn Bowman is a distinguished senior fellow at the American Enterprise Institute.