Will the Air Force Get Lasers for the F-35 Stealth Fighter? 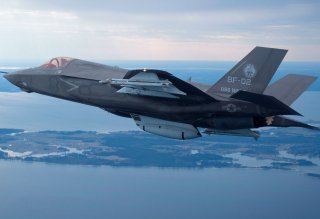 Key Point: It is hard to miniturize lasers, but the work is being one. Once possible, this will let jets shoot down enemy missiles and planes.

The Air Force will one day fire high-tech laser weapons from drones and fighter jets to destroy high-value targets, conduct precision strikes and incinerate enemy locations from the sky.

A 2016 Air Force Research Laboratory report, called "Speed of Light to the Fight by 2020," details how laser weapons can be used to deliver "scalable" effects. These include ways a 30kW laser can create "denial, degradation, disruption and destruction from UAS (drones) to small boats at a range of several kilometers," the report states.

"More powerful lasers have counter-air, counter-ground, and counter-sea applications against a host of hardened military equipment and vehicles at significant range," the AFRL report writes.

A Congressional Research Service report from earlier this year on Directed Energy Programs, also details some of the key advantages and limitations of fast-evolving laser weapons.

Lasers also bring the substantial advantage of staying ahead of the “cost curve,” making them easier to use repeatedly. In many instances, low-cost lasers could destroy targets instead of expensive interceptor missiles. Furthermore, mobile-power technology, targeting algorithms, beam control and thermal management technologies are all progressing quickly, a scenario which increases prospects for successful laser applications.

At the same time, the Congressional report also points out some basic constraints or challenges associated with laser weapons. Laser weapons can suffer from “beam attenuation, limited range and an ability to be employed against non-line-of-sight targets,” the report says.

The AFRL report reinforces this, explaining that laser weapons need to enable precise timing, tracking and pointing amidst the aero-mechanical jitter induced by vibrations during flight.

"System temperature much be controlled via the dissipation of wast, heat and high-speed aerodynamic flow must be mitigated to avoid aero-optical disturbances," the AFRL document writes.

Given the complexity of laser weapons integration, the AFRL report details a three-pronged approach to development; the phased approach begins with subsystems engineering, then moves toward low-power laser testing and them conduct extensive air and ground tests.

"The total number of shots they can fire is limited only by the fuel available to drive the electrical power source," the AFRL report says.

This first appeared in Warrior Maven here. This is has been updated since publication.