Will America Risk Everything to Take on Chinese Naval Power? 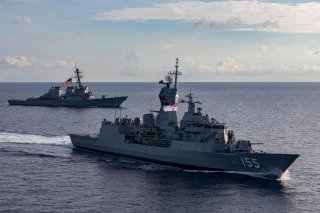 Here's What You Need to Remember: Beijing can ask, sotto voce: how many American lives, and how many aircraft carriers, destroyers, or fighter aircraft, is a group of uninhabited islets worth to you? If the PLA can plausibly threaten to inflict costs greater than that outlay, then U.S. leaders may do the Clausewitzian thing and abjure the effort.