Will the ATF Redefine the Definition of a Firearm? 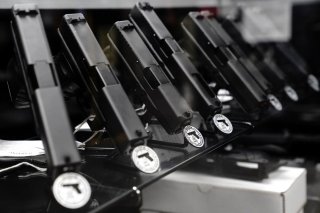 When people see a firearm they see a firearm, but the Bureau of Alcohol, Tobacco, Firearms, and Explosives (BATFE), more commonly known as the AFT, sees guns a bit differently. In the case of a firearm, ATF sees it not as the sum of its parts but by definition a firearm is actually a very specific part—namely the receiver or frame of said gun.

Put another way, it would be like defining an automobile not by its body, wheels, and interior but by its engine. That might seem an odd method, but for regulatory purposes it makes sense. The receiver is where the other parts and components are integrated together. It houses the internal action components, and thus for the purposes of U.S. law, the receiver or frame is legally the firearm.

Now according to a leaked draft of an ATF proposed rule, the very definition of a firearm could be changing. The 107-page document was made public by Stephen Gutowski at The Reload last month, and it seeks to change the regulatory definition of frame or receiver. It could also alter federal markings requirements for all firearms.

The draft notice summary noted, “The Department of Justice (‘Department’) proposes amending Bureau of Alcohol, Tobacco, Firearms, and Explosives (‘ATF’) regulations to provide new regulatory definitions of ‘firearm frame or receiver’ and ‘frame or receiver; because the prior regulations failed to capture the full meaning of those terms. The Department also proposes amending ATF's definitions of ‘firearm’ and ‘gunsmith’ to clarify the meaning of those terms, and to provide definitions of terms such as ‘complete weapon,’ ‘complete muffler or silencer device,’ ‘privately made firearm,’ and ‘readily’ for purposes of clarity given advancements in firearms technology. Further, the Department proposes amendments to ATF’s regulations on marking and recordkeeping that are necessary to implement these new or amended definitions.”

The National Rifle Association’s Institute for Legislative Action (NRA-ILA) has described the proposed change at odds with the controlling federal statue, and warned that it could disrupt the entire industry. The NRA-ILA suggested by changing the definition of a receiver/frame that it would create entirely new marking requirements for certain Federal Firearm Licensees that have no basis in federal statutes.

It could also require that manufacturers would need to get pre-approval from ATF when creating a new firearm design. The change in definition could be bad news for smaller gun makers.

“ATF estimates the majority of affected entities are small entities that would experience a range of costs; therefore, this rule may have a significant impact on small entities,” the document stated.

It was further suggested that the discretionary scheme created by the rule would give the ATF director great power over the entire firearms industry—and the NRA-ILA ominously warned that the timing of the new draft comes after President Joe Biden nominated former gun control lobbyist David Chipman to head the agency.