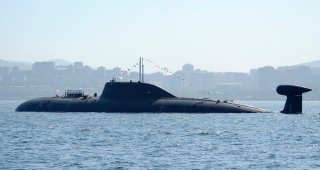 If the architects of the AUKUS pact and its headline initiative to supply Australia with nuclear-powered submarines imagined it would be seen as proliferation neutral, the reality might not be so straightforward. The announcement was extremely sketchy on many critical details, particularly from a non-proliferation perspective.

Of course, how nuclear non-proliferation issues are addressed isn’t the sole test of this deal, but it will be part of managing its future trajectory. It’s notable that the State Department doesn’t seem to have been in the loop on negotiations. It has carriage of US non-proliferation commitments, so some of the proliferation consequences may not have been front of mind.

Prime Minister Scott Morrison has said the deal will comply with Australia’s international non-proliferation commitments. That’s true, as there’s a massive loophole in Article III of the United Nations Treaty on the Non-Proliferation of Nuclear Weapons that exempts naval reactors from nuclear safeguards. However, the non-proliferation community has long seen the loophole as a major threat to one of the treaty’s key aims—to limit the production and use of highly enriched uranium (HEU), which can be used to make nuclear weapons.

Morrison’s statement is less certain when it comes to transfers of Tomahawk cruise missiles to the Royal Australian Navy’s Hobart-class destroyers and Australia’s commitments under the Missile Technology and Control Regime.

This non-treaty association of states aims to limit the risks of nuclear proliferation arising from the sale and transfer of nuclear-capable delivery systems. In the past, the US has backed the MTCR with stringent sanctions for non-compliance.

The last time a country transferred missiles with a range of more than 600 kilometres to another country (not counting US sales of Polaris, Trident and Tomahawk missiles to the UK) was in 1988 when China sold 3,000-kilometre-range missiles to the Saudis. The backlash was immediate and helped consolidate MTCR norms. The Tomahawk family of missiles has at least a 1,000-kilometre range and can be configured for either a nuclear or conventional payload. Some analysts suggest that the transfer of Tomahawks to Australia may erode the MTCR norm of denying transfers of missiles with ranges over 300 kilometres.

There could also be implications for negotiations on the proposed fissile material cut-off treaty, historically supported by Australia, which aims to strictly limit the amount of fissile material that nucelar-weapon states can manufacture. Negotiations are locked in a stalemate, largely thanks to Pakistan. Nonetheless, the treaty’s goals have broad international support and the manufacture of more weapons-grade uranium to power Australia’s submarines will likely also set those goals back.

There seems to be an emerging consensus in the global arms-control community that the AUKUS submarine deal could have a hugely negative effect on non-proliferation norms and practices. Depending on how Washington responds, this could have an impact on how the program unfolds.

Hans Kristensen, director of the Nuclear Information Project at the Federation of American Scientists, says that the deal ‘will further intensify the arms race in the region and dynamics that fuel military competition’. Pointing to the sparse strategic rationale offered so far, he adds, ‘Other than fielding more and better weapons, does anyone have a plan?’

Similar views have rippled across non-proliferation and arms-control circles, driven by fears that the deal will set a precedent ushering in a dangerous era of loosened nuclear restraints.

Daryl Kimball, director of the Arms Control Association, points out that if Australia gets a HEU submarine like the US Virginia class, it will be the first non-nuclear-weapon state to have such a capability.

What will Washington say to other allies, such as Israel, that might want the same technology? What normative leverage will the US have if China and Russia decide to proliferate naval reactor technology and long-range nuclear-capable missiles, or if other nations—let’s say Jair Bolsonaro’s Brazil—seize on this precedent as an excuse to develop HEU for naval purposes?

Others have pointed out that the deal could be inconsistent with the US–Australia 123 agreement on nuclear transfers, as well as the US Nuclear Non-proliferation Act and Atomic Energy Act. If that proves correct, there’ll need to be a legislative component to make the deal legal from the US side.

All of this depends on the nature of the technology transfer on naval reactor design and HEU enrichment—whether it’s a ‘black box’, with no Australian involvement in the nuclear side of the submarine project, or if Australia will have to develop some capability on reactor repair, fuel manufacture, storage and refuelling to accommodate a wartime scenario where total dependence on the US might not be feasible.

In either case, Australia will probably need to modify its safeguard agreements with the International Atomic Energy Agency, given all the questions this deal raises about how the American HEU nuclear fuel cycle will extend to Australia.

Australia has said that it doesn’t want to develop either nuclear weapons or an indigenous nuclear fuel cycle, but other countries will be asking whether that will remain true over time.

Verbal assurances won’t be enough, argues Kimball. He and other arms-control advocates suggest that the US needs to develop legislation ensuring that Australia won’t use this agreement to develop an indigenous enrichment capability.

The non-proliferation community, and other nations, could decide to lobby for another legislative requirement—that the Australian naval reactors be designed for low enriched uranium (LEU) rather than HEU.

HEU is anything above 20% enrichment, but US naval reactors on submarines and aircraft carriers use fuel that is 93–97% enriched weapons-grade uranium.

Transferring HEU technology to a non-nuclear-weapon state is seen as a grave proliferation risk, because it could enable that state to move closer to a nuclear weapons breakout capability without penalty and because it increases the risk of nuclear theft by non-state actors for use in a basic gun-type nuclear device.

The international community went through this issue with Brazil from the late 1970s, when the military junta developed HEU for use in naval rectors, and probably for nuclear weapons. After sanctions and the signing of a special Brazil–Argentina nuclear non-proliferation agreement, Brazil has been developing nuclear-powered submarines with France, which are believed to be LEU fuelled.

In 2020, the House Armed Services Committee, controlled by the Democrats, called for continued study into the use of LEU in the next generation of US submarines.

The Republican-controlled Senate Armed Services Committee disagreed and recommended banning the use of public funds to explore the option. It cited a 2016 JASON defence advisory panel report which found that the use of LEU reactors wasn’t feasible in current submarine designs. Using LEU requires bigger reactors as around 4.7% more enriched uranium is needed than for HEU. Submarines using LEU must be refuelled every one to three years. The Virginia-class HEU fuel lasts for 33 years—the life of the submarine.

But the JASON report also recommends a compromise, using what it calls LEU+. This is 25% enriched uranium, technically HEU but well below the enrichment level needed for nuclear weapons. It would provide roughly the same performance as higher enriched HEU.

The first opportunity to use LEU or LEU+ would be in the Virginia class’s replacement, the SSN(X) or Improved Virginia class, to be designed before 2030.

There are many reasons Australia might want to explore LEU+ as well as working towards best-practice nuclear safeguards. A deal that was meant to demonstrate unified resolve to China has generated considerable blowback, opening up divisions in NATO and the Five Eyes and generating distrust of Australia’s motives—all of which adversaries will be quick to exploit. Working to ameliorate the non-proliferation harms of this deal could help manage some of these effects.

And continuing to discourage a proliferation-permissive environment by upholding global rules is definitely in Australia’s interest, especially in a geopolitical environment where potential adversaries are fielding ever-increasing numbers of weapons.

The US and Australia both recognise the importance of strengthening global rules and the institutions that allow existential nuclear-proliferation issues to be mediated. Conventional nuclear and military deterrence might make state adversaries think twice before using nuclear weapons, but it’s of little use in stopping acquisition and the attendant risks of catastrophic miscalculation.

The article was first published by The Strategist.

Anastasia Kapetas is the national security editor at The Strategist. Image: US Navy/Flickr.