Will German Americans Have the Deciding Vote this November? 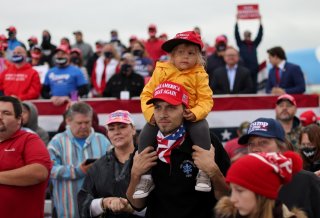 The Midwest, home to many German Americans, is a battleground for the 2020 presidential election. Will this inconspicuous group yet again cast the deciding votes in the upcoming election?

Forty-four million Americans claim German ancestry. They constitute a large white heritage group in the United States, and the largest by far in the Midwest.

Between 1850 and 1890, Germans arrived in the millions to settle in the U.S. German American farmers and workers transformed the frontier wilderness into farmland and fueled the Midwestern region’s industrialization with manpower and entrepreneurial spirit.

Politically, they were never a unified voting bloc. Many were freethinkers, fighting against slavery and for women’s suffrage. They founded newspapers and led labor movements. Others were leading Evangelicals, forming the Missouri Synod, one of the most conservative religious bodies of the country.

For decades, political parties vied for the vote of this heterogeneous immigrant group.

As a result, most contemporary German Americans have lost an authentic connection to their cultural heritage. Unlike other ethnic groups, they do not collectively link their identity to political action.

Yet, despite this low level of community organization and activism, German Americans show common voting patters.

‘Ghost pain of the past’

We conducted a post-election analysis of this group’s behavior in the 2016 election. After we looked at occupational distributions, we suggested in 2016 that the steady economic decline in agriculture and domestic manufacturing in the Midwest made German Americans receptive to populist messages with racist overtones, a view implied by other political scientists and sociologists.

A new, empirical study suggests that German Americans’ support of Trump in 2016 was not a simple outcome of party affiliation and not primarily an articulation of racism.

Rather, German Americans were enticed by Trump’s isolationist agenda, an ideological preference their communities had developed long before 2016. In fact, presidential candidates with policies of protectionism and anti-interventionism have consistently benefited from the German American vote.

For example, in the 1992 race, third-party candidate Ross Perot opposed NAFTA and the first Gulf War. He shared many views on trade and foreign policy with Donald Trump and performed better among German Americans than among any other descendants of 19th-century immigrants.

Interestingly, the tendency to support anti-interventionist presidential candidates even extended to Democrat Barack Obama. More successful than any Democrat in presidential elections in decades among German American voters, Obama put forth a prospective foreign policy agenda that contrasted sharply with that of John McCain, who stood for the continuation of George W. Bush’s unpopular wars in the Middle East.

German American support for America’s first African American president reached close to 60% in many counties of America’s heartland, making it very unlikely that racism was the primary force behind the swing toward Trump in 2016 in these counties.

Rather, this phenomenon shows a consistent attraction to isolationist candidates in these communities rooted in the first half of the 20th century. That’s when German Americans vehemently opposed U.S. military intervention in Europe while being forced to rapidly assimilate.

But can past traumas influence voting behavior 80 years later?

Research on the persistence of historical legacies such as the voting behavior in former slaveholding counties in the South shows that political attitudes indeed can be passed down over generations even while the experiential link to their origin is lost. It appears that German American attraction to isolationism is a ghost pain of the past.

What will happen in November?

Trump has been an isolationist president. He abolished NAFTA, withdrew from the Paris Agreement on climate change, pulled out of the Iran nuclear deal, started trade wars, snubbed military leaders and announced troop withdrawals from NATO allies.

These decisions will increase his popularity among many voters who favor isolationist candidates, including German Americans.

Nevertheless, we believe that Trump’s campaign faces a problem in attracting a similarly large number of German Americans voters this November. Expectations that isolationist policies would lead to greater prosperity in the Midwest were disappointed. Moreover, throughout Trump’s presidency, his record as an isolationist was overshadowed by his image as a racist.

We believe that many of those German American swing voters, who voted for a noninterventionist Obama in 2008 and then were attracted by Trump’s isolationist agenda in 2016, are alienated by his incendiary response to police killings and the Black Lives Matter protests.

A central tenet of isolationism is a strong desire to stay out of trouble through noninvolvement. This applies all the more at home. A growing understanding that the president’s actions did not deescalate but instead amplified violence and chaos on American streets will likely keep many German Americans from voting for Trump a second time.