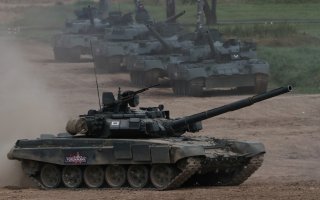 Here's What You Need to Know: What’s interesting here isn’t the tactics themselves, but rather that Russia is trumpeting them as innovative.

“The tank carousel has been a particularly effective tactic during the Syrian Army’s operations in the country’s geographic conditions of earthen and sand parapets,” according to Sputnik News.

Here, tanks can move along the parapet and, when they reach an opening, shoot, quickly concealing themselves back behind the embankment. So long as they remain in constant motion, it becomes almost impossible to aim at or hit them. Furthermore, to deceive the enemy, the commander can choose which opening to fire from at random, giving the impression there are more tanks deployed than in reality. Openings can be created using engineering equipment, and if necessary, by the crew itself.”