Will the Patriot Air Defense System Be a Lifesaver for Ukraine? 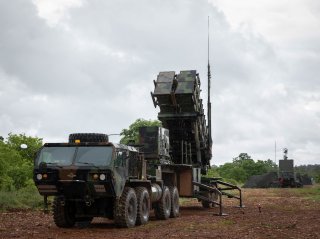 The United States is officially sending Ukraine its long-serve Patriot air defense system to help defend the embattled nation’s civilian infrastructure against the ongoing Russian assault. This decision represents what could be a significant leap in Ukraine’s defensive capabilities, while also serving as a powerful political message about America’s deepening support for the wartorn nation.

However, America’s Patriot air defense system, like the air defense enterprise itself, is a widely misunderstood topic online. So we set out to offer a better understanding of the system itself, its capabilities, and perhaps most importantly, its limitations.

It’s a near certainty that Russia will leverage misconceptions about both the system and its role to advanced narratives meant to undermine faith in American equipment and in Ukraine’s chances at emerging from this conflict victorious.

So, in order to innoculate yourself against the flood of disinfomation that’s sure to ensue, here’s a crash course in America’s MIM-104 Patriot Air Defense system.

What is the Patriot air defense system?

The MIM-104 Patriot system is comprised of multiple assets but serves a singular purpose: identifying and intercepting inbound threats ranging from aircraft to both cruise and ballistic missiles.

Despite being developed with a focus on defending against high-performance aircraft, there was a clear need for countering tactical missiles by the mid-80s. In this context, tactical missiles refer to short-range ballistic missiles, cruise missiles, and air-to-surface missiles deployed by air and rotorcraft.

Ballistic and cruise missiles offer different challenges for air defenses due to their inherent differences in their operation. Ballistic missiles like Russia’s air-launched Kh47M2 Kinzhal or even its nuclear-armed RS-28 Sarmat ICBM could be thought of as similar to rockets. They’re commonly launched using a conventional rocket booster along a high, arcing ballistic flight path before separating from the booster and careening back toward their target at extremely high rates of speed. Nearly all ballistic missiles achieve hypersonic velocities as they approach their targets, but unlike modern hypersonic missiles, they rarely maneuver during their descent, making their trajectories fairly predictable.

Cruise missiles, on the other hand, can be thought of as more akin to suicide drones. They’re often powered by air-breathing jet engines, not unlike tactical aircraft, which allow them to fly under power along a more horizontal and unpredictable trajectory. These weapons fly at much lower speeds than ballistic missiles but can be more dangerous due to their maneuverability and the ability to use to curvature of the earth to mask their approach.

To this end, the U.S. soon fielded two modifications to the Patriot system before it ever even saw combat. The first, Patriot Advanced Capability 1 (or PAC-1), was a software upgrade while the second, PAC-2, included changes to the hardware itself, including a new fuse and larger fragments within the warhead. By the time the first Patriot systems were deployed in the Middle East for the Gulf War in 1991, both of these modifications had been fielded, which made the Patriot system more adept at engaging missiles than it had been at its onset.

However, the Patriot system failed to live up to expectations during its first combat deployment, and as a result, it is often dismissed by those who only recall those early controversies. However, mistaking today’s MIM-104 Patriot system for the same one America fielded over three decades ago would be a mistake.

“In the first Gulf War Patriot was right around 25%. It was doing something it wasn’t necessarily designed for. It was actually built for planes but they decided to throw it at missiles and it sometimes hit. Since then, we have vastly improved the system — like hundreds of upgrades,” explained U.S. Army Patriot Fire Control Enhanced Operator-Maintainer, Sergeant First Class Long. “Now days, Patriot has right around a 95% hit ratio.”

We’ll dive much further into the controversy surrounding the Patriot’s early performance in an another piece.

The Patriot system is usually deployed in batteries that are made up of six primary components as well as some others depending on circumstance:

Today, the Patriot is operated by 18 nations, with the United States operating the largest fleet of systems, with 16 Patriot battalions operating upwards of 50 Patriot batteries with more than 1,200 interceptors in the field.

However, it’s important to understand that the Patriot system does not operate as an island unto itself under normal circumstances. In America’s missile defense apparatus, the Patriot serves as one portion of a layered defense strategy, something Long and the Army refer to as “defense in depth.”

“Defense in depth is defined as having increasing levels of firepower as the threat gets closer to you,” Long explains, “which means the enemy runs into an increasing number of fires as they approach friendly forces.”

What can Patriot missiles (PAC-2 and PAC-3 Interceptors) really do?

Today’s American Patriot systems operate interceptors from two primary families: PAC-2 and PAC-3, though even the PAC-2 missiles are a far cry from their siblings employed in the 1990s.

Incredibly, both PAC-2 and PAC-3 interceptors are actually launched by the Patriot system before it has even secured what’s known as a “weapons-grade lock,” or a targeting solution for the inbound aircraft or missile. Instead, the weapon is deployed in what’s called the “initial fly out” stage of its guidance approach where it is then fed active guidance information from the Patriot’s radar array until it gets close enough to the target to transition from the Patriot’s radar system to its own onboard guidance systems.

This results in an extremely short window of time between an aircraft, for instance, being notified of a radar lock and the weapon itself actually reaching its target.

“The Patriot is by far the most lethal SAM system in the world, and there is no aeroplane in existence that is going to get away from it. The missile itself is also designed to bias its impact on the nose of the aircraft so as to kill the pilot. If a Patriot is fired at your aircraft, you might as well eject, as there is nothing you can do to get away from it,” explained Navy Lt. Cdr. Rod Candiloro, an F/A-18 Hornet pilot who flew during Operation Iraqi Freedom.

His concerns about the system were warranted. At the time, the system was proving very effective at intercepting enemy missiles with its processes automated, but that automation ultimately led to two friendly-fire incidents against a Royal Air Force Tornado and a U.S. Navy Hornet. All three crewmembers involved in those intercepts were killed.

PAC-2 missiles are interceptors that benefit from the PAC-1 and 2 updates discussed above, however, the modern PAC-2 GEM-T, or Guidance Enhanced Missile – Tactical (as opposed to GEM-C with the “C” denoting cruise missile), is a modernized iteration with a number of further enhancements to improve its performance against tactical ballistic missiles.

These interceptors come equipped with a new proximity fuse for their explosive fragmentation warheads, which represents one of the significant operational differences between these weapons and the kinetic-based PAC-3 interceptors.

“As the interceptor missile approaches the target, its active seeker will steer the missile to the target. A PAC-2 Patriot missile will detonate in the vicinity of the threat missile whereas a PAC-3 will seek to impact the warhead of the threat ballistic missile,” says NATO’s “Patriot Deployment Fact Sheet.

The PAC-2 GEM-T is also equipped with a new low-noise oscillator in the nose that allows for improved targeting of aircraft or missiles with a low radar cross-section. These interceptors entered service in 2002 and saw significant success in Iraq the following year.

“In contrast with the experience of Desert Storm, Patriot interceptors defeated every ballistic missile they engaged during the 2003 Operation Iraqi Freedom. Since 2015, Patriot has successfully engaged scores of missiles and drones in the Yemen Missile War. Israel has likewise used it on a number of occasions to defeat drones, aircraft, and other threats,” write Mark Cancian and Tom Karako for the Center for Strategic & International Studies.

PAC-3 missiles use an active Ka-band radar seeker for terminal guidance into the target, with 180 solid-fueled attitude control motors (ACM) in its forward section to allow for heightened maneuverability.