Will Peace Ever Come to Libya or Will Outside Powers Ruin Any Deal? Parties who stand to lose from progress toward a permanent peace deal in Libya will try to halt the process, and will create ground realities that limit the implementation of any agreement that does emerge. The Libyan Political Dialogue Forum (LPDF) approved a voting mechanism Jan. 19 to select a new transitional government to shepherd the country to Dec. 24 elections. Separately, representatives from the country's two rival parliaments met in Egypt on Jan. 19 and agreed on the need to hold a referendum on a draft constitution to determine the structure of the new government.

The new transitional government will take the lead on critical reform issues like security sector reform (SSR) and disarmament, demobilization and reintegration (DDR), which aims to disband and/or integrate Libya's plethora of militias into the official security apparatus and professionalize them. The new government would also need to merge different Libyan institutions that have become split after seven years of two rival governments, including military bodies, police forces, various ministries and the country's national oil company.

A unified government will require a power-sharing arrangement. The voting mechanism for selecting a new government is complicated and there will be numerous back-room negotiations on forming lists, making it highly uncertain who will be selected. But Government of National Accord (GNA) Interior Minister Fathi al-Bashaga and House of Representatives President Aguila Saleh appear to gain the most, since they could align with one another to win cross-regional support. Under the proposed deal, Saleh would be Eastern Libya's representative to the presidential council and its president while Bashaga would be the unity government's prime minister. A joint list comprising the two could find cross-geographic support given Saleh's support in the east and al-Bashaga's being a key architect of the SSR/DDR plans that will find support among Western Libyans tired of militia fiefdoms in the region. Moreover, neither candidate would provoke a significant backlash from other regions, unlike Khalifa Hifter might do because of his offensive on Western Libya.

The system appears to disadvantage Hifter and the Libyan National Army (LNA), which could result in the LNA's trying to undermine the process. Some have speculated that Hifter could be prime minister or the east's representative on the presidential council, but a lack of support for him in Tripolitania due to his offensive could limit his ability — or that of any of his close allies — to do so, meaning he would need to partner with a strong representative from the West to win office. 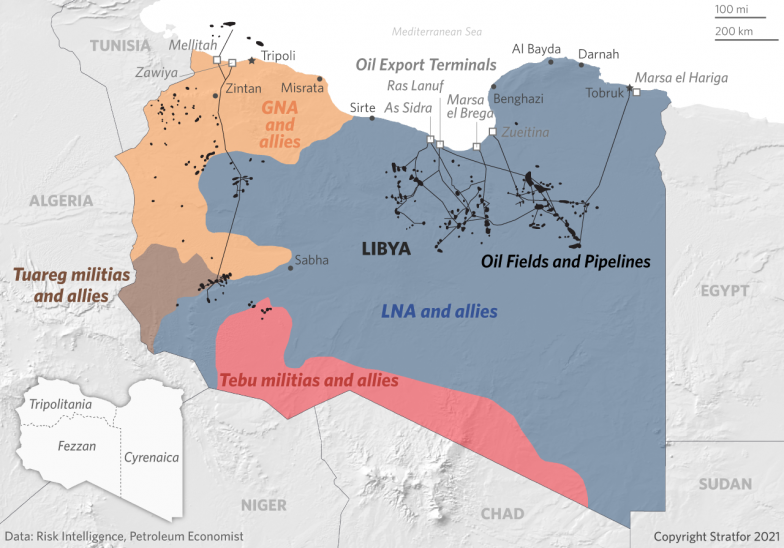 The LNA and Hifter would also view anyone close to the Muslim Brotherhood or Turkey or leading SSR/DDR reforms as particularly dangerous to their interests. Hifter has a long history of playing the role of spoiler when it looks like progress will be made that could diminish his influence.

Hifter has been outspoken on three critical issues, and could use each of them to justify another attempt to disrupt the peace process. Due to his near-monopoly on physical force in Eastern Libya, he retains enough power to follow through should he choose to play the spoiler.

In Tripolitania the voting mechanism for the transitional government appears to weaken the hand of GNA Prime Minister Fayez al-Sarraj and some of the region's most powerful militias. In September 2020, al-Sarraj announced his intention to resign as a power play against al-Bashaga, but has since tried to position himself to stay on as the transitional government's prime minister until elections. Al-Sarraj's challenge is that he was originally selected to be the prime minister in 2015 specifically because he did not have a powerful faction backing him, meaning he is quite weak relative to other contenders, and forcing him to build more political alliances. Western Libya's militias have also benefited from the status quo, which has empowered them to take on policing operations in certain areas, which they have proved effective at — and which have proved very lucrative for them. Western Libya's militias are far from monolithic, however, and some could benefit from the peace process if one of their political allies were empowered. Al-Sarraj would not have the ability to spoil the process on the scale that Hifter could, but for their part, the militias in Tripoli will play a critical role in the effectiveness of any transitional government.

Beyond Libya, foreign powers, particularly Egypt, Russia, Turkey and the United Arab Emirates, could also seek to compel, and/or facilitate efforts by, Libyan allies to disrupt the peace process. Turkey and Russia have either directly or indirectly deployed forces in Libya, and neither appears willing to withdraw them, while Egypt and the United Arab Emirates have provided substantial financial and military support to the LNA.

Consensus building around any new transitional government will be difficult, as at least one major faction will be unavoidably sidelined.