Will Russia Save Alexander Lukashenko? 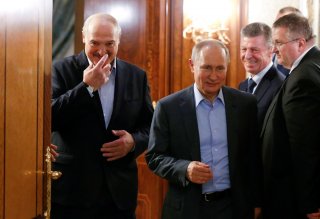 Mass protests, strikes and calls for Alexander Lukashenko to step down after a disputed election have raised the prospect that his long grip on power in Belarus may be coming to an end.

But Russia’s president, Vladimir Putin, is widely expected to play a decisive role in what happens next in Belarus.

Russia’s leaders regard the security of their own state and society as closely bound up with the political orientation of their neighbours. This is especially the case with those countries that were once part of the Soviet Union, sometimes referred to by Russia as the “near abroad”.

This is why the prospect of major political change in a neighbouring country is always a matter of concern for Moscow and nearly always involves some kind of a response.

Russia and Belarus have strong historical, ethnic and linguistic ties and Moscow has backed Lukashenko’s rule for a generation. But recently, the relationship between Putin and Lukashenko has been fraught. Russia has reduced its generous economic subsidies and Lukashenko has become more of an irritant to Moscow than a loyal ally.

Nevertheless, Lukashenko reached out to Putin for help during this current crisis, knowing that Moscow’s support may be all that stands between him and disaster.

To understand the factors likely to drive Russia’s decisions on Belarus, it’s useful to look for patterns in Moscow’s reactions to previous types of change in its nearest neighbours.

Instability, especially when it takes the form of mass violence and armed conflict, is the type of change most likely to provoke an immediate response by Russia involving the use of force. This happened on several occasions in the 1990s, when the struggles for political power and control of territory were most fluid, for example the civil war in Tajikistan and separatist movements in Georgia and Moldova.

Russia’s response to these situations was to deploy peacekeeping forces, often together with military forces from other post-Soviet states, to compel an end to the fighting and enforce a peace or a freeze to the conflicts in a way that protected Russia’s interests.

This is an unlikely scenario for Belarus, where the opposition has been remarkably peaceful. Still, claims by the interior minister, Yuri Karaev, that protesters attacked the police are worth watching carefully.

Such allegations not only seek to justify abuse, torture and murder, but imply that the opposition lacks respect for law and order and would allow the country to descend into chaos and violence if it were allowed to take control. These are coded messages aimed both at society in Belarus and at observers in Moscow.

Suspicion of the West

Another serious concern for Russia is that a pro-western government will come to power in a neighbouring state. Putin views the west as relentlessly hostile towards Russia and always looking for ways to undermine Moscow’s security interests. This view, combined with Russia’s approach to security as a zero-sum game – in which gains made by one side are equivalent to losses by the other – make the prospect of a close neighbour giving its allegiance to the west truly alarming.

This is why Ukraine’s 2013-14 Maidan revolution provoked such a strong response from Moscow. A core demand of the protesters and opposition parties was closer economic and political ties with the European Union rather than the Russian-led Eurasian Economic Union. The pro-western orientation of the post-Maidan governments in Kyiv has included explicit calls for Ukraine to join the EU and Nato.

As well as the annexation of Crimea, Russia’s actions in Ukraine included the use of the military, the covert supply of troops and weapons, and a multifaceted disinformation campaign.

Belarus is unlikely to follow in Ukraine’s footsteps. Its opposition leaders and protesters have focused on domestic political and economic issues. Anti-Russian or pro-western rhetoric has been remarkably absent. A protester who carried the EU flag at one event was even criticised by others in the crowd for bringing a foreign flag.

Lukashenko and the state media have tried to discredit the opposition by claiming that they have foreign backing. They argue that if the opposition gains power, they would introduce blatantly anti-Russian policies, such as banning the use of the Russian language.

These messages are aimed as much at the Kremlin as at ordinary citizens in Belarus in the hope that they will persuade Putin to intervene to save Lukashenko and his regime if the opposition’s position continues to strengthen.

The most optimistic scenario for political change in Belarus with minimal response from Moscow is the precedent set by Armenia. In 2018, Armenia experienced a regime change following popular protests against a rigged election. Its new leadership has been careful to maintain good relations with Russia and there is no suggestion of active interference by the Kremlin.

One indication that Russia’s response to the political turmoil in Belarus has yet to be decided comes from Russian news coverage of the protests. Russian reporting has been largely positive about the protesters but has not presented a consistent narrative about whether Lukashenko or his opponents represent the best future for Belarus. This reflects the lack of direction from the Kremlin about what line to take on the story.

In reality, Putin may be reluctant to rush to aid Lukashenko, especially if another leadership emerges in Minsk that is acceptable to Moscow.