Will the Size of U.S. Army Infantry Squads Change? 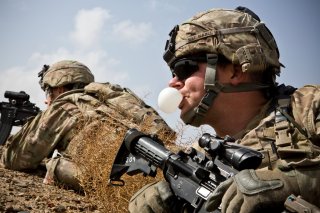 Here's What You Need to Remember: As the U.S. Army adopts new “Next Generation” technology and weapons, it is evaluating whether it needs to change the size of its infantry squads.

The Army has held infantry squads of nine soldiers for decades and has maintained the company as the base of maneuvers for its dismounted troops. The smaller squads were utilized as components of that larger group.

However, the addition of new tools—including drones and enhanced communication—could change the number of soldiers in each squad. According to Task and Purpose, Brig. Gen. David Hodne, commandant of the U.S. Army Infantry School, confirmed in a statement that the service is “conducting a study ... but this might not result in a change to the current 9-soldier rifle squad.”

The study was prepared to help Army officials evaluate the ideal size of a squad when employing those next-generation capabilities. This includes the Integrated Visual Augmentation System (IVAS) and the Next Generation Squad Weapon (NGSW), which are currently in development. The study is currently being carried out by the Soldier Lethality Cross-Functional Team, which is overseen by Hodne, and the Maneuver Capabilities Development and Integration Directorate at Fort Benning.

IVAS is a specialized goggle that offers augmented reality (AR) to provide navigation, targeting, communication, bio-tracking, and even facial recognition and text translation to soldiers when it is deployed to the first units sometime next year.

The NGSW program is currently testing the three prototype weapons that will replace both the M4 carbine and M249 Squad Assault Weapon (SAW). The 6.8mm weapon will extend the range, enhance accuracy, and improve lethality when it is fielded in the coming years.

The Army could follow the United States Marine Corps, which shifted the size of its infantry squads from thirteen—which had been in place for decades to—fifteen. The ArmyTimes reported that the shift to the fifteen-Marine squad added a squad systems operator, who could be tasked with operating an array of small drones and ground-deployed robots. The other added member was an assistant squad leader to better manage coordinating fires and help manage the flood of information being sent to the squad.

“This study intends to determine the optimal size of the Infantry Squad considering the integration of new and next-generation capabilities (NGSW, IVAS, etc),” Hodne added. “However, even if experimentation indicates an 11 Soldier Squad is optimal, this might not result in adjusting the size of the Squad given several factors.”

Those factors could include force structure constraints, personnel costs, and even vehicle design limitations. However, the initial results of the study do suggest that a reduction would not be “a good idea,” so if anything the squads are likely to only increase in size.