Will the Super Rich End Up Paying for Biden’s Stimulus Plans? 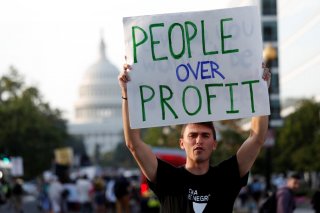 Here's What You Need to Remember: This is an argument familiar to adherents of Modern Monetary Theory. That theory argues that the money in the U.S. Treasury should not be viewed as “taxpayer money,” and that raising taxes on the wealthiest Americans isn’t necessary to raise revenue-but that they should be raised anyway, for a more equitable society.

“How are you going to pay for it?” is a question often asked about ambitious pieces of legislation. President Biden’s American Rescue Plan, passed earlier this year, was passed using deficit spending. However, the president has proposed a different scheme when it comes to paying for the next two packages being offered by his administration, the American Jobs Plan and the American Families Plan.

When it comes to the American Jobs Plan, President Biden plans to include an increase of the corporate tax rate — undoing some of the cuts passed by President Trump in 2017 - while also seeking to close loopholes.

“President Biden’s reform will also make the United States a leader again in the world and help bring an end to the race-to-the-bottom on corporate tax rates that allows countries to gain a competitive advantage by becoming tax havens,” the fact sheet for the legislation says. “This is a generational opportunity to fundamentally shift how countries around the world tax corporations so that big corporations can’t escape or eliminate the taxes they owe by offshoring jobs and profits from the United States.”

A similar fact feet for the American Families Plan vows to “revitalize enforcement to make the wealthy pay what they owe,” while also increasing the top tax rate on the wealthiest Americans to  39.6 percent.

A recent op-ed seems to favor the latter approach.

“Whether the government should tax rich people more to pay for spending priorities is a source of endless debate. Here’s another idea: Tax the rich because it’s the right thing to do,” Stewart writes.

“Sometimes, the haggling and hemming and hawing over what to do about the debt overshadow a point that many Americans find obvious: It’s simply a good, fair idea to tax the wealthy,” Stewart continues. “They have disproportionately reaped the benefits of economic growth and the stock market in recent years, contributing to increasing inequality in the United States. The divide has become even more obvious during the Covid-19 pandemic, during which billionaires have managed to add heaps of dollars to their wealth even as millions of people were knocked on their heels. Some ultra-rich people in the US keep getting richer no matter how much of their money they give away. They literally cannot stop adding to their coffers.”

This is an argument familiar to adherents of Modern Monetary Theory. That theory argues that the money in the U.S. Treasury should not be viewed as “taxpayer money,” and that raising taxes on the wealthiest Americans isn’t necessary to raise revenue-but that they should be raised anyway, for a more equitable society.