Will This Technology Define the Sixth Generation of Fighter Jets? 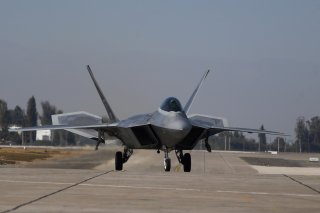 Here's What You Need to Remember: The premise behind Active Flow Control is eliminating reliance on the flight control surfaces we currently use to manage the direction of airflow over a jet (and in turn, the direction it flies) in favor of one or more systems intended to do the same job without them.

DARPA’s effort to incorporate Active Flow Control in military aircraft could eliminate the need for moving flight control surfaces, and while that might not sound like very groundbreaking technology, it might be the biggest shift in aircraft design since the inception of stealth more than a half-century ago.

The Control of Revolutionary Aircraft with Novel Effectors (CRANE) program may carry a long and innocuous name, but the effort may yield the most difficult to detect stealth fighters and bombers ever made. In fact, fielding a jet with no external control surfaces would be such a radical departure from existing fighter design that it would almost certainly warrant a new generational moniker–making such a hypothetical aircraft a good bet for the race to develop the first 6th generation fighter.

- 3rd Generation: Supersonic flight, pulse radar, and missiles that can engage opponents from beyond visual range

Of course, that wasn’t all that made the F-22 special, and although it was, in fact, the first actual stealth fighter on the planet, it also possessed several other essential 5th generation attributes. The F-22 came with highly integrated computer systems capable of communicating with other networked assets. It is a high-performance airframe capable of serving in a multi-role capacity. As a result, it maintains a higher degree of situational awareness than can be found in older platforms and can serve in a broad variety of mission sets. The F-35 built further onto that concept, offering greater situational awareness than any previous fighter in history through more advanced sensor fusion and onboard computing power.

Today, these capabilities have come to be known as fairly standard across the generation of fighters that followed, including America’s F-35 Lightning II, Russia’s Sukhoi Su-57 Felon, and China’s Chengdu J-20 Mighty Dragon. They’re also expected to be found in 5th generation fighters still under development, like China’s J-31. Russia’s new “Checkmate” fighter may fall short of the 5th generation moniker, potentially falling into the “5th generation minus” category of more budget-friendly aircraft that still come with a stealthy design.

Clearly, simply being a new design isn’t sufficient to establish an entirely new generation of fighters, despite how frequently people (and governments) seem to suggest it. In order to be the first aircraft in a new generation, the fighter itself needs to stand head and shoulders above its predecessors in terms of technological integration and operational capabilities.

And that’s where DARPA’s CRANE program and their efforts to field a method of Active Flow Control (AFC) in a demonstrator aircraft come in. The premise behind AFC is eliminating reliance on the flight control surfaces we currently use to manage the direction of airflow over a jet (and in turn, the direction it flies) in favor of one or more systems intended to do the same job without them.

That’s where things get complicated. There are a number of possibilities for systems that could be used in place of–on in conjunction with–traditional control surfaces like those found on modern aircraft. One approach discussed in the American Institute of Aeronautics and Astronautics academic journal is routing puffs of air from the aircraft’s jet engines through specific holes in the aircraft’s fuselage to alter the aircraft’s trajectory in flight. It’s basically an extremely advanced and high-speed approximation of how you might see a spacecraft adjust positioning in orbit. Though, use on an aircraft would require far more precise and powerful execution.

Another approach published in the Journal of Applied Physics calls for using an array of electrodes on the skin of the aircraft fuselage and wings. These electrodes would produce an electrical discharge at specific intervals and locations to quickly heat up the air nearby, changing the air’s density and in turn, how it affects the flight of the aircraft as it passes over, under, or through.

Some AFC concepts have literally been around for decades, but it wasn’t until recently that technology has made the approach feasible without drawing too much power away from an aircraft’s primary means of propulsion.

Regardless of the method or methods employed, the result would be an aircraft that could do away with moving parts on the trailing edges of its wings, tail, and potentially even vertical stabilizers. These sorts of changes would have far-reaching implications for a tactical aircraft.

Effectively employing Active Flow Control in 6th generation fighters could mean a massive jump in both capability and survivability, due in large part to the reduction of moving parts and, in some cases, the reduction of aerodynamic drag required to adjust course mid-flight.

“Active flow control technologies can supplement or replace conventional moveable control surfaces to improve the performance of an aircraft at various points in the flight regime, as well as reduce mass and volume compared to aircraft with conventional controls to enable greater payloads and greater flexibility to the operator,” BAE Systems, who was recently granted a contract by DARPA to continue their AFC efforts, explained.

But there’s a bigger (though maybe harder to detect) elephant in the room: stealth. It might be fair to call flight control surfaces a “necessary evil” for aircraft designers who are trying to limit detection via radar. These hinged surfaces allow the pilot to control the aircraft, but in turn, they often reveal joints, seams, or gaps that can make it much easier to detect the fighter.

Eliminating these control surfaces in 6th generation fighters would mean dramatically reducing their detectability to radar. The reduced weight eliminating these systems would result in could also allow for greater speed, range, or payload capabilities than might otherwise be achievable. And of course, depending on the system employed in place of these control surfaces, fewer moving parts tends to mean less maintenance requirements, which translates to higher readiness rates and lower overall costs.

In other words, 6th generation fighters leveraging AFC technology could fly faster, further, and with more ordnance — and all while being harder to detect than even the stealthiest 5th generation fighters of today. In time, it may even reduce production costs, making stealth elements easier to incorporate into other vulnerable but essential combat platforms like command and control aircraft and refuelers.

In some cases, like in air superiority fighters that prize maneuverability, we may see a combination of both conventional and AFC flight control approaches. A fighter pilot could leverage AFC for broad control of the aircraft while flying through contested airspace, but transition to using traditional flight control surfaces when acrobatic performance might mean the difference between life and death (if they found themselves in a dogfight, for instance).

AFC may well find its way onto the list of required elements of a 6th generation fighter, but it won’t be the only new technology to find its way into, onto, or networked with America’s next top-tier jets. Many believe the defining characteristic of the next generation of fighters will be a networked constellation of support drones like the XQ-58 Kratos Valkyrie leveraging a system like the Air Force’s Skyborg project.

The current front-runner program for first of the 6th generation fighters is America’s NGAD, or Next Generation Air Dominance program. It aims to field an air superiority replacement for America’s incredibly capable–but increasingly rare–F-22 Raptor.