Will We Get a 'V-Shaped Recovery" After Coronavirus? 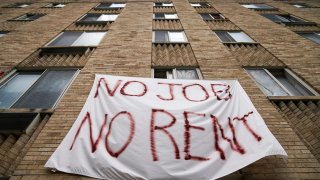 On CNBC’s Squawk Box program yesterday, White House economist Joe Lavorgna assured viewers that a v-shaped recovery was still on track, then added this interesting tidbit: “And the sad thing is before this pandemic contraction hit, underlying productivity growth had been accelerating upwards of two percent, and that may not seem like a lot, but I believe we were on track for a 3 percent plus economy this year absent the virus.”

Now back in February, the Trump White House released a pretty bullish economic forecast. With this caveat included — “assuming full implementation of the Administration’s economic policy agenda” — it projected real US economic output to grow at an average annual rate of 2.9 percent through 2030. In contrast, both the Congressional Budget Office and Fed are looking for growth below 2 percent — 1.7 percent and 1.8 percent, respectively.

And what explains most of that gap is differing views of long-run productivity growth. The White House saw labor productivity averaging 2.6 percent over the decade, about a point faster than the CBO. What the White House thinks now is uncertain since officials decided not to release updated economic projections this summer. (Which is … different.) Anyway, here was its reasoning back then:

The Administration anticipates that the primary contributor to increased growth through 2029 will be higher output per hour worked. During much of the current expansion, U.S. labor productivity growth was disappointing by historical standards, partly due to low contributions of capital deepening. By substantially raising the capital stock and consequent flows of capital services, attracting increased net capital inflows—including investment both by foreign firms and overseas affiliates of U.S. multinational enterprises—and facilitating efficient capital reallocation from mature firms to more dynamic enterprises, we expect enactment of corporate tax reform to considerably increase capital per worker, and thus labor productivity.

In addition to greater capital deepening, I hope what Lavorgna and other White House economists are anticipating is faster productivity growth from a faster pace of innovation driven by a faster pace of technological progress. The CBO sees total factor productivity growth — a shorthand statistical way of getting at the pace of innovation and tech progress — going forward at about half the pace seen in the postwar “golden age” of productivity growth. (Growth propelled in great part by important prewar advances.) It’s a reasonable forecast, but one I hope is wrong — one I think might well be wrong. On that topic, I wanted to highlight a 2017 report from Nokia Bell Labs on the economic potential of the digital economy. The researchers see an upcoming productivity boom of the sort seen in the late 1930s and into the 1940s. That period is a big reason this chart exists, taken from Robert Gordon’s “The Rise and Fall of American Growth”:

The Nokia Bell Labs analysts think a new technology cluster similar to Gordon’s Great Inventions of that era — including networked power and transportation — will drive this second productivity superboom.

And from this study, titled “Will productivity growth return in the new digital era?”:

We assert that we are on the cusp of a new digital era, in which the progress of digitization and connection of everything and everyone, triggered by the ‘internet of things’ (IoT) and supporting technologies, will approach a critical threshold at which point a confluence of key technologies will automate much of life. The net effect will be to effectively ‘create time’ by reducing the time taken to perform mundane physical tasks that defined the past era, thus ushering in a new era of productivity, an era marked by increased output per time worked. … We also assert that there is an additional factor – what we call ‘the combinatorial magic’ – that describes the unanticipated set of additional innovations that arise from novel combinations of the constituent technologies and networks to achieve something that resembles exponential growth. … Our approach to analyzing future productivity starts by anticipating a set of new technologies that are the modern-day equivalent of the prior industrial revolution technologies considered by Gordon. In table 2, we postulate five categories of modern digital infrastructure networks that are in early stages of their deployment but have the potential to fundamentally transform economies and societies and, therefore, will constitute a technological revolution once they reach a critical mass of combinatorial magic (compounded adoption). Importantly, we are not arbitrarily choosing these digital infrastructure networks, they are digital equivalents to the physical infrastructure networks, energy, transportation, health/ sanitation and communications, as indicated in table 2 and described below. However, an additional infrastructure category is warranted that does not have a direct equivalent for the physical era, namely Digital Production. It includes the advent of 3D printing, distributed cloud infrastructure and robotics in increasingly local contexts. Although industrial manufacturing was clearly fundamental in the Gordon era, it was not a first order enabler, rather it was enabled by the four physical infrastructure networks. In contrast, we argue that the technologies identified with this fifth digital category are fundamental to the digital era, and so are directly included in the analysis. … Using this approach, we project that there will indeed be a second productivity jump in the United States that will occur in the 2028–2033 timeframe when the aggregate of the of constituent technologies reaches the tipping point at 51 percent penetration. [sic]

Of course, the sooner the better, especially as the economy recovers from the Great Pandemic with the associated risk of another downturn in growth performance and potential.

This article by James Pethokoukis first appeared in AEIdeas on August 20, 2020.