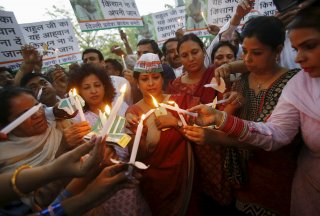 These widespread farmers’ protests have entered their second month to rage against new contentious farm laws passed by the Indian government in September.

Farmers are demanding the Indian government retract the laws, introduced during COVID-19 lockdowns without consulting stakeholders. According to experts the laws, aimed at “liberalizing” Indian agriculture, will gradually drive out small and marginal farmers by creating private monopolies in the market.

Given that 86 per cent of farmers in India are small landholders (owning less than two hectares), strong opposition to the laws is hardly surprising at all.

The protest has garnered huge community support from India and abroad. It has also managed to include and mobilize women. In this way, the farmers’ protests show how modern protest sites can be spaces of resistance and power but also of gender equity and empowerment.

Democratic alienation and an increasing distance between citizens and decision makers seems to be the hallmark of the Modi-led Indian government. An example of this was seen during the Shaheen Bagh protest to the Citizenship Amendment Act.

Shaheen Bagh and the ongoing farmers’ protest are among the biggest protests to rock India in recent times. A noteworthy feature of both these protests is that they have challenged the stereotypes of Indian women that have been dominated by their supposed passivity in the face of victimhood.

The farmers’ protest, however, is distinct from the Shaheen Bagh protest in the sense that it has garnered unprecedented community support. Mostly led by Sikh farmers from Punjab, the protest space reflects the Sikh ethos of langar (free meals), sewa (service), and charhdi kala (high spirits).

The seismic waves of the protest are not only being felt in India but in different countries across the world where the Indian, and particularly Punjabi, diaspora are holding massive rallies against the farm laws.

Punjab and Haryana, the two states leading the farmers’ protest, are characterized by deeply entrenched feudal, patriarchal structures that place significant, deliberate and inadvertent constraints on women. Furthermore, both Punjab and Haryana continue to be counted among the country’s worst-performing states in terms of female-to-male sex ratios.

Usually, in typical agrarian patriarchal societies, women and men do not have equal access to household resources. This inequality is worsened during times of economic hardships as intra-household bargaining for meagre resources intensifies. In other words, decisions are more likely to be skewed in favour of men’s interests when household resources are inadequate to meet the needs of all members.

A decrease in farming incomes is likely to have a disproportionately adverse impact on the lives of women. Furthermore, a decrease in farm incomes is likely to lead to more people going into debt — one of the primary causes of farmer suicides in India. Women belonging to suicide-affected families are particularly vulnerable to poverty. They are left to fend for themselves due to deep-rooted ideas of patrilineal inheritance, which preclude women from owning land.

Against this backdrop, it is remarkable that thousands of women are exercising their agency, braving the biting cold and not only participating in but leading the protests.

When asked about their motivation to participate in the protests, women told journalists about their active involvement in the farming process. Indeed, women of rural India contribute directly towards agricultural production in the form of labour on family-owned farms, as well as indirectly through cooking, cleaning and caring for children and the elderly within the household.

The long working hours and gruelling daily lives of women in rural India are well documented. Monumental contributions to farming notwithstanding, women are yet to be acknowledged as farmers by society. The women at the protest sites, however, are comfortable with their farmer identity. Perhaps the protest is an opportunity for them to publicly claim this identity.

In addition to protesting, women have taken on the entire responsibility of managing their farms and households back in Punjab. These women are also ensuring there is a continuous supply of rations, blankets and other essentials needed at the protest sites. Without this logistical support from the women in their families, and the knowledge that their farms are being tended to, the men could not have camped on the borders of Delhi for more than a month.

Moreover, in the absence of men, women are managing about 100 protest sites in Punjab to keep up the momentum in the home state.

The dedicated participation of women in these protests shows that women’s activism and protest has become an empowering space in and of itself.