World War 2030: This Is What the Future of War in the Skies Will Look Like 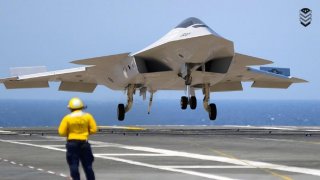 Here's What You Need To Remember: The alignment and collective execution of now-in-development technical attributes rests almost entirely on the continued pace of Pentagon and industry innovation now striving to prepare for and anticipate the unknown, if not even somewhat mysterious, future warfare environment. M

Taking this hypothetical mission yet another step farther, what if the sixth-generation fighter not only performed many of its missions with complete autonomy but also operated with a kind of self-regenerating coating or even composite armor which used synthetic biology to essentially regenerate and restore external structures lost or damaged by enemy fire?

The alignment and collective execution of these now-in-development technical attributes rests almost entirely on the continued pace of Pentagon and industry innovation now striving to prepare for and anticipate the unknown, if not even somewhat mysterious, future warfare environment. Making these things happen, and integrating them to one another such that they complement one another in a coordinated fashion, requires visionary thinking, some amount of guessing, and a delicate blending of art and science combining the best conceptual theorizing with early evidence of scientific promise.

This complex yet highly sought-after mixture of sensibilities and science, it could easily be said, captures the intent of many Pentagon efforts to prepare for warfare decades from now. It is the reason entities like the Defense Advanced Research Projects Agency’s, Lockheed’s Skunk Works works or Raytheon’s lesser-known Advanced Concepts and Technology (ACT) units exist to explore the realm of the seemingly impossible and innovate yet-to-be-envisioned warfare technologies.

While many of these kinds of units have been well known and operational for decades,

Raytheon’s ACT has just fully emerged within the last three to five years. Of course, innovation, basic research, wargaming, and future warfare preparations have always been on the radar at places like Raytheon, ACT came into existence as part of an effort to harness, leverage, optimize, and “pool” the best and most promising thinking. Much like DARPA or Skunk Works, ACTs scope is varied and perhaps too broad to specify, yet there are some emerging areas now showing particular promise, such as those cited in the aforementioned 6th Gen fighter hypothetical scenario.

“We look for innovative solutions and disruptive technologies taking on challenges such as those focused on by DARPA programs. We are not a pure research house, rather we develop new technologies and transition them to the battlefield,” Tay Fitzgerald, Acting Vice President of Advanced Concepts and Technology, Raytheon Intelligence &amp; Space, told Warrior in an interview. Based in McKinney, Texas with sites in El Segundo, California, and Cambridge, Massachusetts, Raytheon’s ACT employs more than 1,000 scientists, engineers, academics, and other experts to explore hundreds of programs focused on both nearer and farther term technologies.

“HELWS was a concept in ACT a few years ago and now that went from whiteboard to delivery, in less than 24 months;, it has logged 13,000 operational hours,” Fitzgerald said. Much of the innovation with HELWS, and other comparable applications, rests upon the ability to not only engineer mobile expeditionary sources of electrical power but build smaller, more adaptable form factors able to integrate onto fast-moving platforms. This is particularly true regarding laser weapons, as they have been operational for several years now on large platforms.

The cutting edge work on laser weapons, therefore, has been centered upon a need to conduct “power-scaling” of laser weapons and engineer sufficient sources of power small and light enough to travel successfully on a stealth fighter jet, yet scalable and strong enough to achieve the sought after destructive effects.

“We are moving rapidly and asking our hardware to do more with less,” Fitzgerald said。

This piece first appeared in late 2020 and is being reprinted due to reader interest.