World War I in the Balkans: Who Were the "Gardeners of Salonika"? 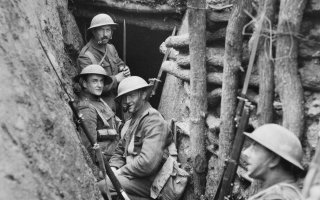 Here's What You Need to Know: The Salonika campaign cost the Allies 165,800 combat fatalities.

The Germans mocked it as their largest prisoner-of-war camp, and French Premier Georges Clemenceau was hardly less withering in his opinion of the Allied stronghold at Salonika, Greece. “What are they doing?” he demanded. “Digging! Then let them be known as ‘the gardeners of Salonika.’” For the one million men who made up the Army of the Orient represented the Allies’ most polyglot force—British, French, Arab, African, Indochinese, Foreign Legionnaires, Serbs, Russians, Italians, and Greeks—it was no laughing matter. Together they languished for three years around the dreary Greek port in what military historian Brig. Gen. S.L.A. Marshall later termed “without a doubt the most ponderous and illogical campaign of World War I.” During that time, they experienced 225 days of hard fighting while enduring some of the worst political infighting and the highest disease rate of the war.

The War in the Balkans

Following the outbreak of the war in August 1914, Serbia had twice thrown back Austrian offensives, largely owing to the brilliant leadership of General Rudomir Putnik. (That Putnik was able to fight the Austrians at all was due, ironically, to the Austrian emperor: Putnik was at an Austrian health resort when war broke out and could have been legitimately interned, but Franz Joseph graciously let him return to Serbia.) With Austria openly seeking allies for a third offensive, Serbia appealed to the Allies for an additional 150,000 troops. Events would turn on the prevarications of two Balkan monarchs.

Although he looked and acted like a buffoon, it was said of King Ferdinand of Bulgaria that his “fool’s cap covered a very shrewd and persistent brain.” The Allies offered him territorial concessions to keep him neutral, but in the end his pro-German sentiments and long-held ambition to reach the Aegean Sea through eastern Macedonia brought him into the enemy camp. On September 6, 1915, Bulgaria signed a treaty with Germany and Austria to join in attacking Serbia to gain control of Macedonia. Only the leader of the Bulgarian Agrarian Party, Alexander Stambolski, had the courage to oppose the king. “This policy will not only ruin our country, but your dynasty,” he warned, “and may cost you your head.” For that dire prediction Stambolski was sentenced to death for treason, but the punishment was commuted to life in prison.

On October 5, the first Allied troops began landing 50 miles south of the Serbian border at Salonika. That same day, German and Austrian forces invaded Serbia to the north. Two days later, without a formal declaration of war, Bulgaria invaded Serbia from the east. The Serbians fought desperately, but they were disease ridden, exhausted, and so short of ammunition that they could fire only a single shell for every 50 fired by the Austrians. Belgrade fell to the Austrians four days later, and German and Bulgarian forces linked up.

Meanwhile, in a month of campaigning, the Allied force—only a third of what the Serbians had requested—managed to advance only 100 miles northward, some 40 miles from the Serbs. A Serbian general ordered to counterattack wrote his superiors: “No one can expect these troops to go on fighting, even less can they be expected to launch an offensive attack. They are too few in number, their clothes are in rags, they have no boots, and they are starving. If we do not get out soon, our scanty stock of supplies will give out. Let us retreat now, for otherwise all hell will break loose.”

With the escape route to Salonika blocked by the Bulgarians, more than 300,000 Serbian soldiers and civilians turned west for one of the war’s great tragedies. It developed into an epic, three-week-long, 100-mile march over the mountains to Albania and the Adriatic coast. A British nurse, M.I. Tatham, who accompanied the Serbs on the march, recalled, “The stream of refugees grew daily greater—mothers, children, bedding, pots and pans, food and fodder, all packed into the jolting wagons; wounded soldiers, exhausted, starving, hopeless men and (after the first few days) leaden skies and pitiless rain and the awful, clinging, squelching mud.”

The Serbs suffered temperatures of 20 degrees below zero, rampant typhus and dysentery, and repeated assaults by hostile hill tribes. Wounded and sick soldiers were abandoned, and those falling out from sheer exhaustion were also left behind. The Serbs ate their own horses, and surgery was performed without anesthesia. In the end, some 20,000 civilians died during the retreat. The elderly King Peter rode in an oxcart, an ailing Putnik in a sedan chair (he had to relinquish command at the end of the march and died in France in 1917). Government ministers and Allied diplomats alike slept on straw along the way. Even after the survivors reached the Adriatic coast, they starved and suffered for another four months until, in April 1916, the Allies shipped 260,000 Serbian soldiers to the Greek island of Corfu for refitting, then transported them to the Allied stronghold at Salonika.

Serbian Premier Nikola Pasic blamed “the indecision and inactivity of our allies” for Serbia’s defeat, but King Peter remained defiant. “I believed in the liberty of Serbia as I believe in God,” he said. “I am tired, bruised, and broken; but I shall not die before the victory of my country.” He would have to wait. The Allied expedition to Salonika would continue to drag on for almost three years. The Serbian appeal for assistance had reached the Allies just 13 days before the invasion. The British were wary—Prime Minister Henry Asquith called it “a wild goose affair”—but reluctantly agreed to transfer the 10th Division from the Gallipoli front. The French were more forthcoming, although it soon appeared that their enthusiasm had as much to do with finding a command for a controversial general as with helping the Serbians in their hour of need. Although not without ability, General Maurice Sarrail owed his rise to his strong support in leftist French political circles. Commander in Chief Joseph Joffre distrusted Sarrail and relieved him of command of the French Third Army in July 1915. Even in the midst of world war, however, French politics remained as ideological and chaotic as ever, and to avert the type of parliamentary crisis over which French cabinets were routinely toppled, Sarrail was given the Salonika command to appease his supporters.

Political Troubles of the Salonika Expedition

Almost as soon as they began, the Allied landings were stopped in their tracks by another royal problem in the Balkans. King Constantine of Greece professed neutrality, but his motives were long suspected by the Allies—he happened to be the kaiser’s brother-in-law. Constantine was also locked in a power struggle with Greece’s leading statesman, Prime Minister Eleutherios Venizelos, who was staunchly pro-Allied. Since Greece had a treaty obligation to help defend Serbia, Venizelos favored the landings, but on the day they began and Serbia was invaded, the king suddenly fired Venizelos.

The future of the Salonika expedition teetered in the balance. The British were ready to abandon the enterprise, but the French were determined to continue. The landings at Salonika resumed, leaving the Greeks with the unpalatable choice of tacitly supporting them or fighting to stop them. With no unified command, Sarrail began moving his forces toward Serbia through the Vardar Valley; the British 10th Division followed a week later. Although easily routing the few Bulgarians they encountered, the Allied advance was slow. “All our moves have been done in inky blackness and usually under rain and on very ill-defined tracks in the hills,” 10th Division Captain G.H. Gordon wrote home.

On November 16, the Allies reached their farthest point north, where the Crna River flows into the Vardar Valley. But bad weather and the first appearance of the campaign’s worst scourge—disease—had disastrous effects on the Allied effort. The 10th Division alone reported 1,700 cases of frostbite and illness, and on December 5 the Bulgarians suddenly counterattacked. Within a week the Allies were back south of the Greek border.

The military high command in London recommended immediate withdrawal. Chancellor of the Exchequer David Lloyd George, an early proponent of the expedition, angrily told War Minister Lord Kitchener, “It seems you and the Germans want the same thing.” An English correspondent at Salonika, G. Ward Price, observed: “The Salonika expedition is not doing [the Germans] any vital harm; it is Bulgars, not Germans, who are being killed by our attacks. The German High Command knows that Salonika is a heavy drain upon the resources of the Allies.”

At an Allied conference, Asquith argued Salonika was “from a military point of view dangerous and likely to lead to a greater disaster.” The French resisted, partly for diplomatic reasons but also because of the political repercussions of relieving Sarrail. Meanwhile, Sarrail seized control of Salonika from the Greeks, expelling the enemy consulates that Athens had allowed to continue to function and spy on the Allies. Over the next four months, the Allies constructed a 70-mile-long defensive line of barbed wire, machine-gun emplacements, dugouts, and concrete positions 20 miles north of town. But while he was building up the front, Sarrail was also dividing it. His habitual arrogance and penchant for intrigue soon alienated British General Sir George Milne and the other Allied commanders.