In World War I, Even Animals Needed to Wear Gas Masks 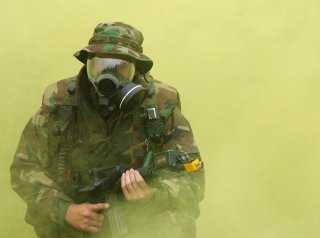 Here's What You Need To Remember: Horses often chewed through the canvas bags after mistaking them for feed. They were still vulnerable to skin blistering during mustard gas attacks and irritation from eating contaminated feed. Some cavalry horses had their own goggles to protect their eyes during chlorine gas attacks, but issues with fogging limited the use of goggles

There was nothing more terrifying in the trenches than the call of a gas attack — “GAS! GAS!” This warning cry sent men scrambling for their masks as the poisonous fog enveloped them. Soldiers succumbed to the strangling effects of chlorine, phosgene and mustard gas for years as the stalemated armies searched for news ways to defeat each other.

During World War I, more than 90,000 soldiers died on all sides from gas attacks, which debilitated many more. And it wasn’t just human combatants who suffered — many military working animals died from chemical weapons.

Take the most famous canine hero of the war, Sergeant Stubby of the 102nd Infantry Regiment, American Expeditionary Forces. The most decorated dog of the war earned many of his accolades from alerting his human comrades to incoming gas. A dog’s nose can be tens of thousands of times more sensitive than a human’s — which makes canines useful detectors of explosives, drugs and even cancer.

Stubby’s strong response to poison gas had its roots in an earlier close call. During that attack, mustard gas sealed his eyes shut with viscous mucous and he barely moved for days. It was an undoubtedly traumatic experience that taught Stubby all he needed to know. After his recovery, Stubby went on to save human lives because he understood the danger.

Stubby wasn’t the only dog left with a fear of this deadly new weapon. Rags — a mongrel with the U.S. 1st Infantry Division — fell foul of a German gas attack, as too did Tommy, a German Shepherd in service with the British Expeditionary Force.

Gas threatened the lives of all military working animals on the Western Front. The death or immobilization of these animals meant curtailing their enormous and unique contributions to the war effort.

However, there was one other tiny gas-detecting hero on the Western Front — the slug. Slugs were far more effective than dogs at detecting incoming mustard gas attacks. The U.S. Army was the first to discover the slug’s life-saving secret. Three times more sensitive than humans, slugs reacted to mustard gas at one particle per 10-12 million. They would compress their bodies and temporarily stop breathing, alerting soldiers to the danger and giving them enough time to pull on their gas masks.

What’s more, thanks to their natural abilities, slugs would actually survive the attacks unscathed — which is more than could be said for every other animal on the Western Front.

More than eight million horses, mules and donkeys and a million dogs died in World War I. Everyone knows the enormous human cost of the conflict, but it is easy to forget the fates of the million of animals that supported the war on all sides. Animals were important companions and workers to the soldiers at the front, and like their human compatriots they needed protection from the perils of chemical warfare.

Pack animals carried supplies and weapons on the front and rear lines. The railways that carried the millions of tons of food and ammunition to the rear were frequently several miles away, so horses, mules and donkeys bridged the gap even after engineers set up light railway and automobile supply lines. (The Germany army would remain majority horse-drawn through World War II.)

Between 1916 and 1918, gas hospitalized 2,200 horses and killed 211, mostly because logistical uses limiting their exposure to the more dangerous areas at the front.

The Germans used some 30,000 dogs on the Western Front, and the Entente kept around 20,000. Some dogs pulled heavy machine guns on trolleys, others used their keen sense of smell and hearing for sentry and scout work. Their small size helped them slip over and between trenches to deliver messages, shuttle medical supplies or lay down communication wires.

In a less formal way, dogs improved morale within the trenches by hunting rats and acting as companions to troops in miserable conditions. Cats also performed well in this role.

Homing pigeons carried out a crucial mission in the conflict. Carrier pigeons were the most reliable communications tool in the war. Around 100,000 birds carried messages back and forth from the front with a success rate of more than 95 percent. They were so important as messengers that pilots would even carry them to call home if they found themselves stranded behind enemy lines. To counter the pigeons, the Germans trained hawks to hunt them and retrieve their messages.

The front lines were hard enough for their human masters, but the animals were acutely sensitive to chemical warfare. They typically received less food than the soldiers and worked to exhaustion. They didn’t have the autonomy of their human comrades, either.

In a gas attack, troops had to save their own lives before they could cover up their more vulnerable animal brethren. And when it came to covering up, all sides of the war attempted to protect their vital animal assets.

Before animals received customized gas masks, many soldiers simply attached human masks. Troops wrapped straps around the noses of pack animals, or squeezed dogs’ faces into the soft baggy masks they used for themselves. This caused some problems. The shallow covering of the human mask could not protect a dog’s sensitive ears. For horses, mules and donkeys, the distance between their eyes and nose left some blinded during poison gas attacks.

Birds presented an even bigger problem — how do you fit the large human respirator onto a small bird?

The answer was customization.

The obvious answer for birds was to fit the respirator onto the bird’s carrier. The Germans used a wooden box with filters as a portable option, and fitted their trenches with larger steel lofts to house birds when on the front. On the whole, however, pigeons proved resistant to all but the deadliest of gases and continued their critical flights in even the most awful conditions.

Horses’ eyes, like pigeons, proved resistant to tear gas and other irritants. So initial efforts simply focused on protecting their respiratory systems. The British fitted their horses with nose plugs — horses are natural nose-breathers, so handlers stuffed their noses with gauze and pinned it in place. But it was painful and time-consuming.

So the Army found inspiration from existing technology — the equine feedbag attached to the horses’ heads. Both the Germans and British armies developed a five-inch by 14-inch flannelette and cheesecloth bag soaked in filtering chemicals fitted around a horse’s nose. But this afforded limited protection.

Horses often chewed through the canvas bags after mistaking them for feed. They were still vulnerable to skin blistering during mustard gas attacks and irritation from eating contaminated feed. Some cavalry horses had their own goggles to protect their eyes during chlorine gas attacks, but issues with fogging limited the use of goggles. As a result, exposure to the more dangerous gases left horses blinded alongside their human comrades.

Dogs had their own gas masks, too. Many of these early masks simply restitched the goggles and respirator from the human mask and fitted the apparatus to a canvas bag or sock that wrapped around the dog’s neck. This protected the entire head from exposure.

Canines, like humans, are susceptible to the effects of tear agents and needed nasal and oral protection. The new contraption protected their sensitive ears, too. This, and the space to allow their jaws to open, were essential if dogs were to continue working during an attack.

To protect Sergeant Stubby, his owner John Robert Conroy of the 102nd Infantry Regiment bought a French canine gas mask. The U.S. Army would not begin work on its own mask until 1926, but the Germans, French and British had experimented with applying existing human masks to their dogs early into the war.

However, Stubby’s mask was a poor fit for the thick bull terrier’s head. With the help of a French officer, Conroy made a new mask that fit the dog better and trained him to not only leave it on, but to retreat to the safety of the trench’s bunker.

Dog handlers had it easy compared to the pack animal operators. While dogs could be trained to calmly sit still while their handlers strapped and tied the mask to their animal, soldiers had to restrain mules with ropes. But saving these pack animals from gas attacks allowed them to continue to deliver critical supplies to the front.

The horrors of chemical warfare have thankfully yet to be repeated on such a devastatingly similar scale, but the experience has allowed militaries worldwide to protect even their most vulnerable service members from harm.