World War II: Did the Nazis Sabotage a Ship in New York? 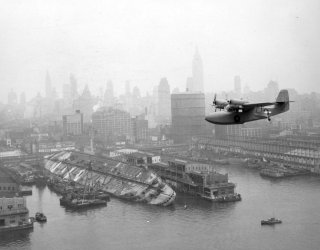 Here's What You Need To Remember: In hindsight, the ship's capsizing seems to have been the result of a careless mistake rather than a nefarious act of sabotage. Still, the public can hardly be blamed for panicking; after all, it was only weeks after Pearl Harbor.

That event was the sinking of SS Normandie in New York City’s Pier 88 on February 9, 1942. The Normandie, a French luxury ship constructed in 1931, was one of the most magnificent vessels of its day. When first built, it held the distinction of being both the largest and fastest ship in the world. With regard to size, the vessel was 1,029 feet long and 119 feet wide, and displaced eighty-five thousand tons of water, much larger than the Titanic. The ship also traveled at an incredible 32.1 knots and transversed the Atlantic on its maiden voyage in just four days.

By happenstance, the Normandie was docked in New York City when the French government surrendered to the Nazis in 1940. Although the United States was officially neutral in the war, Washington decided to intern the ship to prevent it from falling into Berlin’s hands. For a year and a half, the French crew was allowed to stay on the ship and maintain it, but not leave port. In the fall of 1941, with the ship still docked in Pier 88, Time magazine reported that the U.S. government intended to seize the ship and turn it into an aircraft carrier in the event that America entered the war.

A month later, following the Pearl Harbor attack and Hitler declaring war on the United States in December 1941, the United States did seize the ship, which it renamed the USS Lafayette in honor of the French general who aided America during the Revolutionary War. Instead of an aircraft carrier, the United States decided to convert the Normandie into a troop-transport ship. The process was extremely rushed, however, and the conversion effort was further complicated by responsibility being transferred repeatedly between the Navy and the Army.

All of this contributed to the tragedy that began at 2:30 in the afternoon on February 9, 1942, when a welder’s work caused a spark that caught nearby life preservers on fire. That fire quickly spread to other parts of the boat, partly as a result of the haphazard response. Within a half hour, smoke could be seen from Manhattan. Still, because of the sheer size of the ship, the damage to it was considered slight, and responders believed they had gotten the fire under control by 8 p.m. Yet, ultimately, the water needed to put out the fire caused the ship to capsize, and the ship went down roughly twelve hours after the fire had first begun.

The event captivated the nation. New Yorkers swarmed out to the docks to witness the spectacle in the tens of thousands. Meanwhile, as the Chicago Tribune would later recall: “Radio stations from coast to coast interrupted afternoon soap operas, cooking hints, and children’s stories with bulletins on the progress of this spectacular blaze. In drama and shock value, the Normandie burning was radio fare eclipsed only by the Pearl Harbor coverage, and certainly on a par with the explosion of the Hindenburg at Lakehurst in May, 1937.”

Although authorities quickly ruled that the fire had started by accident, rumors of sabotage spread rapidly. FDR was reportedly told that a majority of New Yorkers, “from expert shipping men to subway gossipers,” believed that the Axis powers had sabotaged the ship. One popular theory was that the ship’s sprinkler system had been filled with gasoline to ignite the flames (possibly because of a similar incident in a film Alfred Hitchcock had just finished making). And doubts about the official story were not limited to common citizens, as lawmakers and other officials were skeptical as well.

Their suspicions were not unreasonable. After all, Pearl Harbor had happened only a few months before. Moreover, German U-boats had been waging a relentless campaign against transatlantic shipping since the war in Europe began, and this effort only accelerated once America entered the war. Indeed, German U-boats lurching off America’s eastern coast obliterated fifty-nine merchant ships weighing 276,795 tons in January 1942 alone; in March of that same year, they sank ninety-five ships weighing 534,064 tons.

It was also reasonable to assume that German spies were operating in New York harbors. As one historian, Lorraine B. Diehl, points out, “German spies had been operating in the United States with very little censure since the 1930s, taking jobs in factories and bars along the Manhattan, New Jersey, and Brooklyn waterfronts. As bartenders, they could easily pick up vital information from seamen. Some had worked on American ships during peacetime, placing them above suspicion.” In fact, thirty-three German agents had just been sentenced to more than three hundred years in prison by a Brooklyn court a month before the Normandie incident.

Unable to squash rumors of sabotage, Navy Secretary Frank Knox opened up an inquiry into the matter, although he said the findings would not be made public. This too was not enough. Sen. Arthur Vandenberg, a prominent foreign-policy lawmaker, introduced a resolution calling for a separate Senate investigation into the fire, declaring that “‘this amazingly tragic event’ was the work of an ‘enemy at home’ that was either ‘sabotage or negligence.’” The New York Times editorial board piled on, declaring, “The investigation should be relentless.” Under the weight of this public hysteria, the FBI, Navy, Senate, House of Representatives, New York City Fire Department and Manhattan district attorney all launched their own separate inquiries.

Although the subsequent reports differed on which person or organization was most responsible for the Normandie’s fate, they all ruled out sabotage as the cause. As the Manhattan district attorney put it, “There is no evidence of sabotage. Carelessness had served the enemy with equal effectiveness.” The Chicago Tribune similarly concluded: “Unreasonable haste to put her to sea combined with gross carelessness, confusion, and the further ingredient of cruel coincidence to knock the liner out of service as effectively as though she had been torpedoed.”

The Normandie was eventually salvaged, but not in time to participate in the war. Its remains were eventually sold for scrap. Still, the Normandie incident so weighed on government leaders that they ultimately formed a secret pact with the Italian mafia to protect America’s harbors during the war. The cost: releasing Lucky Luciano, the godfather of the American mob, from prison.

Zachary Keck is the former managing editor of the National Interest. You can find him on Twitter: @ZacharyKeck. This article first appeared in June 2017.