This World War II Soldier Was Decorated Like a Tree 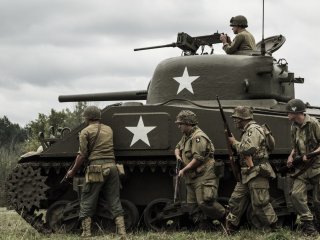 Key Point: Perhaps no other individual best represented the average American male of middle America than did Alexander Bonnyman.

Four Medals of Honor were awarded for acts of conspicuous gallantry during the invasion of Tarawa atoll in the Pacific during World War II. It is perhaps indicative of that four-day ordeal that three of them were awarded posthumously. The citation most covered in the press at the time, which caught the imagination of the American public, was given to the family of U.S. Marine 1st Lieutenant Alexander Bonnyman for his actions on November 22, 1943, the final day of battle.

A Man Out of the Military

Perhaps no other individual best represented the average American male of middle America than did Alexander Bonnyman. Born in Atlanta, Georgia, on May 2, 1910, Bonnyman grew up in Knoxville, Tennessee, after his family moved there when he was two years old. Bonnyman’s father became president of the Blue Diamond Coal Company of Knoxville, one of the widest distributors of coal for home heating at the time. Bonnyman attended Mrs. J.A. Thackston’s School in Knoxville as a youth and graduated from Newman High School in Lakewood, New Jersey, before entering Princeton University in 1928.

“Sandy was a very handsome guy, a pleasure to be with,” said his 99-year-old classmate John Harmon, who until recently still went to work in his investment office in suburban Chicago twice a week. “We ate lunch in the Commons and talked about women.”

Bonnyman studied engineering and emerged as a college football star during his sophomore year, playing guard on the 1928 Tigers football team. Ever restless, he dropped out of college in 1930, lacking the grades necessary to advance to his junior year. He finally enlisted in the Army Air Corps as a flying cadet on June 28, 1932.

He attended preflight school at Randolph Field, Texas, but for reasons still unclear washed out of the aviation program and received an honorable discharge on September 19 of that same year. He found employment in his father’s company and married a local sweetheart named Josephine Bell, in San Antonio, Texas, on February 15, 1933. Always striving to improve his lot in life, Bonnyman moved to New Mexico in 1938, where he purchased a small copper mine with interest in a second in Santa Rosa, about 60 miles outside Santa Fe, and started his own small mining business at the age of 28. During this period he fathered three daughters, Frances, Josephine, and Alexandra. He seemed to have found his place in life.

When war broke out in 1941, Bonnyman was exempt from service due to his age (31) and the fact that he was running a company producing strategically vital material necessary for the war effort. Nevertheless, determined to see action, he signed up once again for Army Air Corps flight training and washed out once more, reportedly for buzzing too many control towers. He then turned to the Marine Corps, which accepted him as a private in July 1942. He enlisted in Phoenix, Arizona, and received his basic training at the Marine Corps Recruit Depot in San Diego, California.

“Sandy” Bonnyman, as he was known to his friends, sailed for the South Pacific in October of that year aboard the transport USS Matsonia as a member of the 6th Marines, 2nd Marine Division, headed for Guadalcanal. He served with distinction during the Guadalcanal campaign as part of a Marine pioneer unit (similar to a light Army combat engineer group), using his engineering experience during his time there to build a vitally needed bridge across the flooded Poha River. Now a corporal, at the conclusion of the campaign in February 1943, he received a battlefield commission to the rank of second lieutenant in recognition of what his superiors described as exceptional leadership skills.

After a stateside leave, he saw his family for what would be the last time. Then, the Marines began intensive training for the upcoming campaign to seize Tarawa, an atoll in the Gilbert Islands. On September 1, 1943, Bonnyman was promoted yet again to executive officer of the 2nd Battalion, 8th Marines shore party, detailed to handle shore logistics and the landing of men and supplies. Bonnyman’s civilian experience, temperament, and skills were deemed ideal for the post and would come to play a vital part in the Marines’ ability to come ashore in his sector against heavy Japanese opposition.

The amphibious landing on the islet of Betio at Tarawa atoll on November 20, 1943, turned into one of the grimmest bloodbaths of the entire Pacific War. Some of the landing craft in the first wave were hung up on the island’s surrounding coral reefs; many men were drowned or cut down before they had a chance to make it to shore. Those who did found only a narrow strip of beach a few yards wide with little more than a narrow seawall of coconut logs for cover.

Hitting the Beach on Tarawa

The Japanese had had months to prepare defenses on Betio, and every square foot was covered by Japanese weapons. Whole units were held up at the water’s edge or cut down trying to secure a foothold. Once the surviving Marines reached the beach, they confronted a network of Japanese pillboxes, snipers, and artillery fire. By nightfall the Marines ashore were hanging onto a tenuous foothold.

Bonnyman’s position as executive officer of the 2nd Battalion Shore Party did not give him direct combat responsibility. Nevertheless, he took on a leadership role in the chaos, assembling and leading an ad hoc assault team, as shown in the 1944 documentary With the Marines at Tarawa. “He was a good, likable guy, but he took no guff,” remembered Leroy Kisling of Modesto, California, then a sergeant who served with Bonnyman as a demolition man on Tarawa. He recalled Bonnyman as a generous man who would share his officer’s liquor ration with the noncommissioned officers. “Wading into Tarawa, we all had our hands full. One of the guys had a mine detector, and he thought it was too heavy, so he dropped it into the ocean. Bonnyman threatened to send the guy back under enemy fire to get it. His attitude was, ‘You’ve got a job to do; you’d better do it.’ ”

Sandy Bonnyman soon demonstrated the courage and valor on that first day that gained him the gratitude of a thankful nation at the cost of his own life. When the assault troops comprising the first wave were pinned down by heavy enemy artillery fire at the seaward end of the long Betio pier, Bonnyman, acting on his own initiative, gathered a group of five men and led them across the open pier, swept by continuous Japanese machine-gun and mortar fire, to the beach beyond. There he obtained flamethrowers and demolition charges and oversaw the destruction of several enemy installations that were preventing the Marines from moving forward.

On the second day, November 21, the Marine advance was held up by a cement blockhouse and a large, sand-covered redoubt, later known as Bonnyman’s Hill. The blockhouse, containing at least 150 Japanese defenders, was impervious to air attack and shelling from the naval vessels assembled offshore. Destruction of this position would open a hole in the entire Japanese defensive line, allowing the Marines to pour through to the interior of the island.

The Japanese position, 40 yards forward of the Marine lines, was inflicting heavy casualties. An ad hoc squad of assorted engineers, including Corporal Harry Niehoff leading a demolitions section and Corporal John Borich in charge of two fully loaded flamethrowers, was assembled. Neither of these men knew Bonnyman before that moment.

“He just showed up,” remembered Niehoff. “Until that time we were being held up with no gain to show for it.” The unit was nicknamed “Forlorn Hope.”

The initial assault carried the men forward almost to the mouth of the Japanese position, and a number of Japanese troops were killed along the way. However, the Marines were eventually beaten back short of ammunition. As the day faded, Bonnyman surveyed the Japanese position with an experienced engineer’s eye, carefully studying the approach to the bunker, the various outlying machine-gun positions, and taking special notice of the large air vents that protruded from the top of the bunker. Tomorrow would be different.

Bonnyman’s third and last day on Tarawa, November 22, dawned bright and clear to find the Marines still pinned down in the same positions they had occupied on the previous day. Under the sweltering tropical sun the temperature soared to 110 degrees Farenheit later in the day. By this time another individual had attached himself to Bonnyman’s squad, a Marine Corps photographer by the name of Corporal Obie Newcomb. Newcomb quickly realized he was in the presence of someone unusual and decided to follow the lieutenant’s assault with his camera. The action he was about to record belied the oft-repeated Hollywood myth of Bonnyman strapping on a flamethrower and singlehandedly taking on the Japanese. What happened that day was the result of teamwork, but also the intelligent, selfless, and absolutely fearless leadership of Sandy Bonnyman.