World War II What-If: The U.S. Had Other Horrifying Plans For Japan in 1945 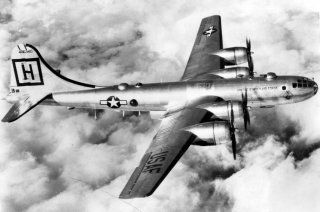 Here's What You Need to Remember: The idea of destroying farms and food stores to hurt an opponent during war is as old as recorded history. By the end of World War II, the United States was nearly ready to put the old tactic into action on an enormous scale.

In May, President Barack Obama’s historic visit to Hiroshima reignited discussions of whether the United States actually needed to drop atomic bombs to force Japan to surrender at the end of World War II. What these debates didn’t touch on was that the U.S. military prepared to use other horrifying tactics, including starvation induced by chemical weapons.

In April 1944, the U.S. Army started cooking up special chemical compounds to destroy or otherwise damage crops. A year later, the ground combat branch was hard at work getting the weapons ready for a possible campaign on the Japanese home islands.

“The possible use of … a chemical warfare agent, to destroy essential crops on the Japanese mainland and on the by-passed occupied islands, was given close consideration during the last year of World War II,” members of the National Defense Research Committee explained in a 1946 report.

When the war ended, “the development of methods of dispersing the agents was proceeding under high priority.”

Tokyo had given up the fight after Washington destroyed Hiroshima and Nagasaki with two atomic bombs in August 1945. But had the conflict continued, the U.S. military might have decided to devastate Japanese farmlands in a massive chemical assault.

The idea of destroying farms and food stores to hurt an opponent during war is as old as recorded history. By the end of World War II, the United States was nearly ready to put the old tactic into action on an enormous scale.

By April 1945, the Army had tested more than 1,000 different types of chemical agents at Camp Detrick in Maryland less than 50 miles from the nation’s capital, according to a 1947 history of the service’s biological warfare programs.

The ground combat branch hired Ohio State University to synthesize more than 200 of the more promising compounds, while troops and scientists at Detrick developed the rest of the chemical compositions. The Army cataloged all the substances using the two-letter code “LN” followed by an arbitrary number.

“No thoroughly successful approach was made as a result of wartime studies for the destruction of cereal crops by chemical agents,” the NDRC review explained. “Several compounds appeared promising.”

From a military perspective, phenoxyacetic acids appeared to be the most useful. These chemicals confuse plants, making them grow out of control and die.

Since targets in Japan were difficult to reach, the Army researched ways to drop or spray the herbicide from airplanes. Already well established in the civilian world, crop-dusting could effectively coat fields and rice paddies with dangerous mixtures.

In April 1945, B-25 bombers with 550-gallon tanks in their bomb bays sped across test fields at Terre Haute, Indiana and Beaumont, Texas. In the experiments, the planes unleashed clouds of Vegetable Killer Acid, often blended with diesel fuel and other oils.

The Army found that the heavier — and slightly sticky — mixture more reliably fell where it was supposed to instead of being blown off course in the air.

“However, effective spraying required hazardous low-altitude flight over the target site,” the Army’s biological weapons history noted. “It was believed that heavy bombers, capable of extended flight and high altitude bombing, would be required if Japanese rice crops were to be attacked.”

The Army’s air arm was already engaged a firebombing campaign against Japan’s urban and industrial centers. The month before the spray tests, a single raid on Tokyo killed more than 100,000 people, torched some 280,000 buildings and put a million residents out on the street.

The Pentagon clearly envisioned a similar series of crop busting strikes. So, in June 1945, a U.S. Army Air Forces B-25 bomber zipped across a test range at the Granite Peak Installation in Utah, dropping a series of cluster bombs.

Each canister held 125 pounds of LN-8-based mixture. But the weapons turned out to be faulty and wouldn’t open properly. The Army quickly moved on to other options.

The next month, the bomber returned to Granite Peak and dropped SPD Mark 2 bombs. This design was a simple container — made of sheet metal — full of nearly 200 pounds of Vegetable Killer Acid. A B-29 bomber could carry dozens of these weapons.

At a predetermined height, an explosive cord burst the shell open and sent the chemical agent flying. Using an earlier British bomb as a template, the Army had originally crafted the SPD series to hold biological weapons like anthrax or ricin.

While the SPDs worked, the tests exposed new problems. Dropped from high altitudes, the bombs easily spread the herbicide over too wide an area to be useful.

On the other hand, if the weapons popped open closer to the ground, they might not cover enough space to be practical. The Army spent considerable effort trying to find a sweet spot for when the bombs should explode and how big the individual clumps of LN-8 should be for maximum effect, according to the NDRC review.

Testing showed the substances worked best on plants with broad leaves — where the compound could collect — rather than grasses and cereal grains such as wheat or rice. For those targets, the Army would have had to find other chemicals or hope for the best.

And this is to say nothing of how toxic the compounds might be to wildlife or people. The 1925 Geneva Protocol banned the use of chemical and biological weapons in warfare.

But as of 1947, the Army still wasn’t entirely sure how dangerous chemicals like LN-8 were, how long they might stay around in the soil and what would happen if they contaminated water sources.

“In large doses, 2,4-D is a gastric irritant but is not lethal,” the ground combat branch concluded, referring to the active ingredient in LN-8 by its chemical abbreviation. “It also appeared that 2,4-D-is nontoxic by inhalation and is not readily absorbed by the skin.”

We don’t know whether these estimates would have held true if hundreds of B-29s had dumped thousands of pounds of Vegetable Killer Acid on Japanese farming regions. With these studies in hand, after the war ended, Dow and other companies did sell the chemical as a commercial weed killer.

In 1987, the World Health Organization formally classified the compound as a possibly cancer-causing carcinogen. Two decades later, the Environmental Protection Agency declared it could not conclusively link the substance to cancer in humans.

The same cannot be said for LN-14, another compound the Army considered dumping on Japan. Decades later, researchers discovered the manufacturing process left dangerous amounts of a carcinogen known commonly as dioxin in the chemical mixture.

The U.S. Air Force and Army sprayed thousands of gallons of the compound over South Vietnam during the 1960s and 1970s. The infamous herbicide Agent Orange actually contained a mix of the same active ingredients found in LN-8 and -14.

In 1985, the EPA finally banned the chemical completely from sale and use in the United States. However, Dow Chemical announced in January it plans to sell its latest formulation of 2,4-D — blended together with glyphosate, another chemical perhaps best known by the trade name Roundup — to American farms.