Would the U.S. Army Stand a Chance against Enemy Drone Swarms? 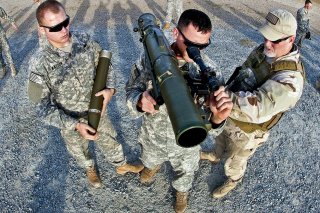 Here's What You Need to Know: The Army has plans to stay ahead of the technological curve.

(Washington, D.C.) They can form swarms of hundreds of mini, precision-guided explosives, overwhelm radar or simply blanket an area with targeting sensors. They can paint or light up air, ground or sea targets for enemy fighters, missiles or armored vehicles, massively increasing warzone vulnerability. The can instantly emerge from behind mountains to fire missiles at Army convoys, infantry on the move or even mechanized armored columns.

They --- are commercial and military attack drones now proliferating at alarming rates around the world.

Not only are attack drones easily purchasable on the commercial market, but they are rapidly becoming more and more advanced given the lightning speed at which technology is now advancing. Video can be gathered with much higher fidelity at longer ranges, navigational systems can more accurately merge with sensors and targeting technologies and larger numbers of drones can increasingly operate in tandem - in a more coordinated fashion. Battery technology, to cite another example, is progressing so quickly that drones are increasing dwell time over targets, complicating any effort to defend against them.

Overall, the Army is fast-tracking what could be called an entire sphere of counter-drone weapons; these include Electronic Warfare innovations to jam enemy drone signals, Stryker-mounted Hellfire missiles to shoot drones out of the sky and -- in a Raytheon effort with the Army -- create an integrated “sense-track-hit” counter-drone kill chain.

Called the Howler, Raytheon’s Counter Unmanned Systems (C-UAS) could be described in terms of a three-pronged approach; mobile or ground fixed radar uses Ku band radio to detect enemy drones before the signals are analyzed by computerized fire control, leading to the firing of an armed tube-launched interceptor drone called Coyote.

“This operates throughout the kill chain. We start with sense and detect using our radars, then we use Command and Control which is the brains...and then our effectors,” Cliff Johnson, business development director for tactical radars, Raytheon Integrated Defense Systems, told Warrior.

The effectors, as referred to by Johnson, can come in the form of Raytheon’s Coyote 1 and Coyote 2 mini attack drones. Equipped with an advanced seeker and small warhead, Coyotes can launch from a range of locations, including fixed locations and armored vehicles on-the-move.

“It can be mounted on a vehicle where it has the radar and the Coyote launch tube, with a separate vehicle that has command and control. It can also be in fixed locations where everything is taken off the vehicle,” Johnson said.

For instance, in the event that an Infantry Brigade Combat Team, with armored vehicle support, were maneuvering through mountainous terrain, they could easily be vulnerable to sudden drone attacks. The Raytheon-Army Howler program, operational and ready for war, exists for exactly this reason. By sending electromagnetic “pings” forward at the speed of light, the Howler’s radar can bounce signals off enemy drones and then analyze the return signal. This process is engineered to produce a rendering of the size, shape and even speed of an enemy drone. This information is then processed through fire control technology, intended to target the enemy and guide the interceptor. Therefore, it seems almost too self-evident to say, speed is of the essence. This is why Johnson emphasized the rapid sensor-to-shooter coordination needed to complete the kill chain.

“Moore’s Law states that the processing power of electronic devices doubles every 18 months. By 2025 the currently widely proliferated “quadcopter” drones and their successors will have the capability to fly autonomously—at much higher altitudes, with longer flights—and be capable of complex formation maneuvers. These advances may happen soon since drones are already making strides in these areas,” the essay states. (Lt Col Leslie F. Hauck III, USAF & Dr. John P. Geis II, Colonel, USAF, Retired .. as of 2017).

Interestingly, this move to accelerate sensor processing and fire control, as discussed by Johnson, aligns with current Army technical thinking when it comes to increasing the speed of fire control technology. Much of this naturally hinges upon computer processing speed and an ability to gather and organize vast pools of incoming sensor data. Therefore, it is no surprise that quickening the detection and processing functions has the attention of Army Futures Command’s Artificial Intelligence Task Force.

“Fire control is about enabling and speeding-up what you can recognize in the battlefield to help a soldier who might normally have to sift through intelligence data and look for cues to get the right targeting information,” Lt. Col. Chris Lowrance, autonomous systems lead, Army Artificial Intelligence Task Force, told reporters at the Association of the United States Army annual symposium.

All of this generates a compelling need to keep pace with technological change, surge advancement of weapons able to detect and destroy drones and pursue initiatives to better understand the technical mechanisms of drones themselves. These efforts, underway by both industry and the military services, represent the pursuit of technologies engineered to mirror, replicate and even acquire the types of commercial drones available around the world. Naturally, understanding the components and functions of enemy drones are the prerequisite or precursor to the development of technologies able to track and destroy them. Simply put, before a drone can be “jammed,” “intercepted” or “destroyed” by weapons, its technical mechanisms and functionality must first be understood.

“There are systems now that can take down UAS with little collateral damage, and these systems are becoming more autonomous in the short term,” Brig. Gen. Matt Easley, director of the Army Artificial Intelligence Task Force, told reporters at the Association of the United States Army Annual Symposium.

The challenges of taking out attacking drones, which Howler and other systems are engineered to meet, is now being addressed across the services. The Army’s Rapid Equipping Force has been fast-tracking electronic-warfare based weapons to “jam” enemy drones, the Navy has been tailoring shipboard sensors to enable interceptor weapons to knock out medium and low-flying drones in maritime combat and the Air Force has been working to upgrade fighter-based Active Electronically Scanned Arrays to find enemy drones at greater distances.

“How do we see attacks coming in and sift through those attacks faster? We want to see attacks in real time,” Easley said.