Would the U.S. Military Stop a Russian Invasion of Ukraine? 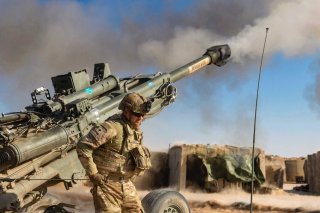 ​Here's What You Need to Remember: Ukraine isn’t part of NATO. However, the Ukrainian military does share a close relationship with its American and European partners.

Ukraine and Russia are once more beating the drums of war in Eastern Europe as long-standing tensions between the two countries threaten to ignite a full-fledged conflict.

Both sides have been moving troops and equipment in the border region, while the U.S. European Command (EUCOM) has raised its watch level from “possible crisis” to “potential imminent crisis,” the highest watch level before a conflict.

The cause for this latest reigniting of tensions was an artillery attack by Russian-backed forces against Ukrainian positions that killed four Ukrainian troops. The fighting took place along the “Line of Contact,” a 250-mile-long frontier that divides Ukrainian forces and Russian-backed separatists in the Donetsk region in the eastern part of Ukraine.

There are several U.S. military units in countries nearby, and EUCOM recently moved a squadron of MQ-9 Reaper remotely piloted aircraft in neighboring Romania.

Russia has moved thousands of troops and materiel close to the Ukrainian border.

The Ukrainian Parliament demanded that Moscow “immediately cease hostilities and strictly adhere to the ceasefire, fully fulfill its international obligations and withdraw from Ukraine its army, mercenaries, armed formations, which it leads, provides and finances, their weapons and equipment, and regain full control of Ukraine’s internationally recognized borders.”

Ukrainian lawmakers, moreover, called on international organizations and jurisdictional institutions to investigate possible violations of international law, law of war, and crimes against humanity by Russia and its paramilitary forces in Eastern Ukraine and Crimea.

In 2014, Russia surprised the world by invading and annexing Crimea, which belongs to Ukraine. Almost simultaneously, ethnic Russian separatists forces in Donetsk launched attacks in the region in an attempt to dislodge the region from Ukraine and join Russia.

Ukraine isn’t part of NATO, and thus an attack on the country wouldn’t trigger the transatlantic alliance’s clause 5, which demands that all NATO member-states come to the aid of a member-state that has been attacked. However, the Ukrainian military does share a close relationship with its American and European partners.

For example, in 2019, a Ukrainian special operations unit became the first-ever Ukrainian unit to pass NATO’s special operations qualification process and be considered as deployable alongside American and European commandos. Equally important, Ukraine was the first non-NATO country to achieve this feat.