X-24: This 1960s Aircraft Helped Pave the Way for the Space Shuttle 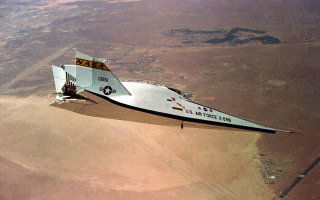 Here's What You Need To Know: This experimental aircraft helped validate the concept that a Space Shuttle vehicle could be landed unpowered.

When it comes to experimental aircraft, looks can be quite deceiving—especially when designs break from traditional “norms.” This is certainly the case with the Martin (now Lockheed Martin) X-24A, a unique airframe that was a joint program between NASA and the United States Air Force. It was developed as a part of a group of lifting bodies flown by the NASA Flight Research Center—now the NASA Neil A. Armstrong Flight Research Center—at Edwards Air Force Base in California, the premier site for aeronautical research.

A lifting body is a rather straight forward concept—the body of a fixed-wing air or spacecraft provides the lift. Aerodynamic lift, which is essential to flight in the atmosphere, is obtained from the shape of the vehicle rather than from its wings, such as on a normal aircraft. (Although a lifting body might not even have wings.)

The joint program, which ran from 1963-1975, was used to demonstrate the ability of pilots to maneuver and safely land wingless vehicles that were designed to fly back to Earth from space and be landed like an airplane at a predetermined site.

The X-24A, which was built by Martin for the U.S. Air Force, had a bulbous shape that resembled a teardrop that lacked wings. It was 6,270 pounds, 24.5 feet long and 11.5 feet wide at the fuselage. To the untrained eye its bomb-like shape would only be good for getting to the ground rapidly, but the engineers understood that its rocket engine could propel the vehicle into the sky at speeds approaching Mach 1, while its three vertical fins at the rear provided the direction control.

Its first unpowered glide flight was on April 17, 1969, with Air Force Major Jerauld Gentry at the controls. Nearly a year later Gentry also piloted the squat little craft on its first powered flight on March 19, 1970. Gentry was able to successfully control the X-24A, which descended sharply “like a streaking hang glider“ and maneuver it to the ground. The pilot was able to perform an unpowered landing on a dry lakebed near the NASA Flight Research Center. The aircraft had become the ultimate “proof of concept” for the NASA scientists; as it proved that it was possible for a wingless aircraft to descend from the upper atmosphere and glide safely back to the Earth.

The experimental aircraft was flown 28 times and helped validate the concept that a Space Shuttle vehicle could be landed unpowered. In its fastest speed test, the X-24A achieved 1,036mph or MACH 1.6, while its maximum altitude was 71,400, which was to simulate a shuttle landing approach. Typical flights lasted under eight minutes and included a 2.5 minute rocket burn followed by a 5 minute glide to landing.

The X-24A was modified into the X-24B where its bulbous shape was converted into a “flying flatiron” shape that had a rounded top, flat bottom and double delta platform that ended in a pointed nose. In this configuration the aircraft further demonstrated that accurate unpowered reentry vehicle landings were operationally feasible. On August 5, 1971, the X-24B made the first successful landing of a lifting body vehicle on a conventional airplane runway.

While the program is today largely forgotten it certainly paved the way for the Space Shuttle, while the shape of the X-24A was later borrowed for the X-38 Crew Return Vehicle (CRV) technology demonstrator for the International Space Station.