X-47B UCLASS Stealth Drone: Cut Down In It's Prime? 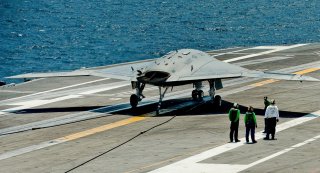 Here's What You Need to Remember: The program collided into a wall of debate, with some developers arguing that the aircraft needed to remain stealthy like the X-47B to defeat rival air defenses, yet others felt it needed to be larger, bulkier and therefore less stealthy to carry large fuel tanks in order to conduct longer-dwell missions without needing to return or refuel.