XF-84 Thunderscreech: A Jet With A Cool Name That Flopped 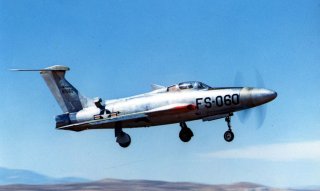 Here's What You Need To Remember: Due to poor performance, high maintenance, and its other issues, the XF-84H never became operational. One of the two prototypes is now in the collection of the National Museum of the United States Air Force and is in the Research & Development Gallery.

There is no denying that the swept-wing F-84F Thunderstreak – which could attain speeds just shy of 700 mph – was an ideal aircraft when it entered service in 1950. Simply put, it terrorized the North Koreans. It was the evolutionary development of the United States Army Air Forces F-84 Thunderjet, the swept-wing Thunderstreak was still, in essence, a new and arguably superior design.

However, those early jet fighters weren't without issues.

The aircraft accelerated slowly, which required long takeoff runways, so to solve the problem the experimental turboprop-driven XF-84H – a joint U.S. Air Force/Navy project – was adapted. In hindsight, it seems almost "counter evolutionary." The concept called for a way to combine the speed of a jet aircraft with the long-range, low fuel consumption, and low landing speed of a propeller-driven aircraft.

The XF-84H utilized a modified F-84F airframe that included a T-tail and a triangular fin behind the cockpit to reduce the effect of torque from the propellers. The power from the turboprop was meant to be quicker and easier to control than that of a jet, and as noted it required less fuel. In theory, the turbine engine, which was mated to a supersonic propeller, had the potential of setting airspeed records for propeller-driven aircraft. In reality, the aircraft had far too many problems to be much more than a curiosity.

Two prototype aircraft were produced, and between July 1955 and October 1956, the aircraft made a total of 12 test flights. However, 11 of those flights ended with emergency landings. While it was one of the fastest single-engine, propeller-driven aircraft ever built, it was unable to approach the supersonic speed that the designers envisioned.

To give the aircraft a bit more speed, the XF-84H also has the notable distinction of being the only turboprop to be outfitted with an afterburner, but the test program was canceled before the afterburner was ever in flight.

A far bigger problem was that the supersonic propeller blades created an "ear-splitting howl," which, according to some accounts, was so loud that it physically sickened the ground crew. Given the prior aircraft had been named Thunderbolt, Thunderjet, Thunderstreak, and Thunderflash it didn't take long for the XF-84H to be unofficially dubbed the "Thunderscreech."

The sound was so loud that when the aircraft warmed up its engines the sound could be heard more than 20 miles away, which resulted in testing to be done in remote parts of Edwards Air Force – otherwise the noise actually prevented the air traffic controllers from hearing anything over their radios! The shockwave from the propellers was also powerful enough to knock a man down; making it dangerous to be anywhere near the aircraft while it was on the ground.

Interestingly, only two civilian test pilots ever flew the aircraft and after just one flight one of those two vowed never to get in its cockpit again. As such, the XF-84H has the dubious distinction of being the only U.S. Air Force prototype not actually flown by an Air Force pilot.

Due to poor performance, high maintenance, and its other issues, the XF-84H never became operational. One of the two prototypes is now in the collection of the National Museum of the United States Air Force and is in the Research & Development Gallery. It remains one of those aircraft that was likely better in concept than in reality.