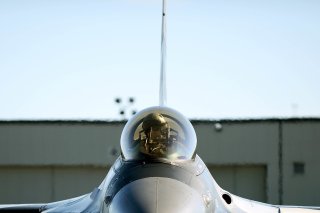 Here's What You Need to Know: Normally, the Air Force can create new pilots in about 12 months. The new pilot program slices five months out of that and produces pilots in just seven.

Seven Air Force officers made history by becoming the first to graduate from a new pilot program earlier this month.

The “Accelerated Path to Wings” (nicknamed XPW) program promises to significantly shorten the time it takes for pilot candidates to finish their basic education.

Normally, the Air Force can create new pilots in about 12 months. The new pilot program slices five months out of that and produces pilots in just seven.

During the XPW program, pilot candidates completed their undergraduate training curriculum in the T-1 Jayhawk, making it simpler than if they were using more airframes for their basic education. The XPW program is part of the Air Education and Training Command’s (AETC) attempt to transform, improve, and shorten the current pilot program.

“We had students from various backgrounds, including five who had completed their initial flight training and two who had earned their private pilot’s license,” Lieutenant Colonel Eric Peterson, the commander of the 99th Flying Training Squadron, said in a press release.

Traditional pilot training is divided into three phases where pilot candidates first fly the T-6 Texan II before going over to the T-1 Jayhawk. The XPW program, which has two phases, does without the T-6 Texan II phase and puts students straight in the cockpits of the T-1 Jayhawk. After the standard preflight academics and aviation terminology phase, students go on the simulator where they develop extensive training profiles.

“It feels amazing to have endured the last seven months of pilot training to reach this point. It’s all been worth it. I’m extremely proud. I can’t wait to begin flying around the world,”  2nd Lt. Kassandra Fochtman, who is slated to fly the KC-135 Stratotanker out of McConnell Air Force Base, Kansas, said.

“Graduating from the first XPW class is pretty special,” said 2nd Lt. Andrew Button. “I volunteered for this not knowing if it would work out or not, but I just put my trust in the Air Force. I want to give credit to my family and the world-class instructor pilots at the 99th FTS.” Button is slated to fly the C-17 Globemaster III transport out of Joint Base Charleston, South Carolina.

The Air Force is suffering from a shortage of qualified pilots, a shortage so big that now the service is offering close to half-a-million bonuses for pilots to stay. If implemented fully, the XPW program might help address the issue.