The "Yellow Peril," Revisited (As In Blaming Chinese People for the Coronavirus) 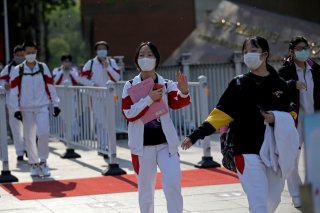 This rise in anti-Asian sentiments is not limited to university campuses. The president of the United States recently yet again called COVID–19 the “China Virus.” While some American officials have tried to downplay the president’s rhetoric, others blamed China’s culture for the virus.

Despite consensus among social scientists that race is a social construct, xenophobic attacks on Chinese communities and Asians at large during the pandemic show that race has real life consequences for groups marked as an other.

Blaming Chinese people or Chinese culture for the pandemic only serves to reinforce stereotypes of East Asians as the “yellow peril.”

How do constructions of the Chinese as “diseased” inform their dehumanization and that of East Asian communities in Canada and globally? How does their dehumanization at this time mirror the techniques of racialization of other racial and ethnic groups that have often played out in popular media? These are difficult questions that can be better understood by examining the racism that Chinese communities in Canada and the U.S. have suffered well before they were regarded as members of today’s “model minority.”

Chinese immigrants first arrived in Canada when Chang Tsoo and Ah Hong entered British Columbia to prospect in the Cariboo gold rush in 1858.

By 1882, the Chinese Exclusion Act legally restricted Chinese labourers from the U.S. and resulted in Chinese migration to Canada and Mexico. At the time, the law was the first of its kind at the federal level in the U.S. and denied Chinese immigration for over 80 years.

The act was in place until the Immigration and Nationality Act of 1965 and prohibited Chinese labourers, both skilled and unskilled, from entering the U.S.

In a study of the historical antecedents of severe acute respiratory syndrome (SARS), writer Carianne Leung found that Chinese communities in Canada were historically constructed as the “yellow peril” and their presence compared to that of the plague. Chinese settlements in the country “were regarded with the same hysteria as an infectious disease spreading across Canada.”

In 1885, a commissioner described Vancouver’s Chinatown as an “ulcer” and suggested that, if left untreated, would “cause disease in the places around it and ultimately the whole body.” At that time, newspapers discursively cast Chinatowns as relating to “disease and filth.” By the mid 1890s, the Vancouver municipal council included Chinatowns as categories for inspection, along with “sewage,” “slaughter houses” and “pig ranches.”

Linking COVID-19 with China invokes a well worn narrative of Chinese people as “diseased,” a link also present with the appearance of SARS in 2003. It is a technique of racialization that works to dehumanize via discursive practices. Language is used to cast Chinese communities as a foreign and dangerous other. In this example, the idea of illness, sickness and disease is invoked. A group must first be dehumanized and stripped of their humanity before their marginalization can be justified.

These discursive practices provide justifications for marginalization, distrust, exclusion and increased social distancing between Chinese communities and other communities.

A Technique of Dehumanization

Wherever a pandemic goes xenophobia is never far behind. Since the outbreak of the coronavirus reports of racism toward East Asian communities have grown apace.

In a CBC radio story, Amy Go, president of the Chinese Canadian National Council for Social Justice said that many of her friends and family members experienced racism due to misinformation and stereotyping about the disease. Meanwhile, in the United States, Chinese Americans are increasingly becoming the targets of xenophobic attacks.

Earlier this year, a University College London student from Singapore was racially assaulted. The perpetrators, two boys aged 15 and 16, allegedly shouted, “I don’t want your coronavirus in my country.”

In a recent article for The Atlantic, Yasmeetn Serhan and Timothy McLauglin write that pandemics often isolate specific groups, as indicated by the targeting of Africans during the 2014 Ebola outbreak. With this in mind, the World Health Organization (WHO) refrained from linking the virus to a specific geographic location when it was first described to the global community.

Dehumanization is often the first and most insidious technique of racialization. The racism accompanying the spread of and response to COVID-19 must be addressed.