Yes, the Japanese Invasion of Alaska Was Hidden From the U.S. Public 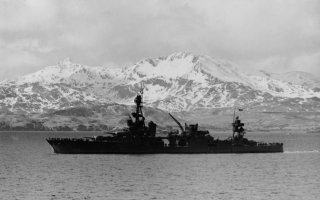 Here's What You Need to Know: The occupation of the Aleutians wounded American pride and aroused indignation.

For decades Americans have been spoiled by the instant coverage of war in the media. The stark reality of Vietnam entered homes with the evening news. A plethora of military experts, including many retired senior officers, analyzed every nuance and possibility of American and Allied actions both before and after the jump-off against Iraq in the desert war. Front pages of newspapers reported the carnage of the “highway of death” as the Iraqis retreated from Kuwait. Americans have come to accept almost “being there” when the nation’s armed forces are committed. Such was not always the case.

An excellent example of the fog of war is the media coverage of the fighting in Alaska and the Aleutian Islands during 1942-1943. Instead of being covered by a host of reporters, each competing to be heard or read, there was scant coverage of these events. The fog of war was as literal as it was figurative. Actual visibility was shrouded by poor weather. Information visibility was clouded by a lack of press on the scene, other wartime events of greater significance to editors, or official press releases designed to buoy sagging morale without providing valuable information to the enemy. It was fertile ground for rumor and speculation, both of which found their way into the media. When the fighting in Alaska and the Aleutians was over, the war moved on.

News was delayed, censored, and incomplete, while Americans knew comparatively little of what really happened during fighting on their own soil.

On Thursday, June 4, 1942, the front page of The New York Times published an ominous box with the heading, “Coast Radios Silenced.” The Fourth Army Fighter Command in San Francisco had ordered all radio stations off the air lest they guide unidentified aircraft (later found to be friendly) to western cities.

A battle was raging at Midway 1,100 miles west of Hawaii. Another component of the Japanese offensive against Midway was taking place several thousand miles to the north. To Americans, the two widely separated actions seemed like a spectacular wide-front advance of the yet unbeaten enemy. To some newspapers, however, they were two distinctly different events. The action to the north of Midway was a daylight raid on Dutch Harbor in the territory of Alaska. A terse Navy release said, “… no further details at this time.”

The San Francisco Chronicle, while filled with news of Midway, told of the attack on Dutch Harbor, warning, “War comes closer to home.” It said the Alaska attack was no surprise. Hanson Baldwin of The New York Times also thought the actions at Midway and Alaska were not unexpected inasmuch as they were retaliation for the April air raid on Tokyo by Jimmy Doolittle, which had been launched from the aircraft carrier USS Hornet. Baldwin felt that Dutch Harbor was merely a feint.

The next day, headlines proclaimed the victory at Midway and a Navy denial of another Dutch Harbor raid. Another radio blackout on the West Coast was reported as well, with Seattle being on a full war footing because of Dutch Harbor. No Navy releases were issued, and the absence of reporters in the formerly quiet Alaska sector caused the press to speculate that Dutch Harbor was a ploy to draw U.S. forces away from Midway. Many West Coast residents were convinced that they were next to be attacked following Dutch Harbor.

The most sensational story of all was published in the Chicago Tribune and reprinted in the San Francisco Chronicle. It said that the Navy knew of the Japanese plan and was waiting to meet the main Japanese force at Midway. Since the main thrust was known to be at Midway, American forces concentrated there and Dutch Harbor was ignored. Senior Navy commanders were enraged that such a story should appear but were compelled to maintain silence to avoid potentially compromising the fact that code breakers had cracked the Japanese naval code and were aware of the enemy’s intentions.

Given the paucity of reporters on site, the Navy obsession with secrecy and the other significant events worldwide, news from the Aleutians was sketchy. What appeared in the newspapers and aired over the radio emanated from Washington and came from Army and Navy releases subsequently distributed by the wire services to their subscribers. Thus, the public, no matter what its access to news, was being fed the same information throughout the country. The wire services also picked up broadcasts from enemy sources. Americans dismissed most of these as propaganda, but this was not always so.

On June 9, Berlin radio said Japanese forces had occupied islands in the western Aleutians. The Japanese then announced their occupation, which drew a Navy denial: “None of our inhabited islands are troubled with uninvited visitors at this time.” The Japanese were claiming that the Dutch Harbor raid had destroyed bases posing threats to Japan and that the Midway operation had prevented U.S. reinforcement of Alaska.

Press speculation said that the Aleutian fog could be hiding Japanese forces. It raised a question of an attack on Russia. It assumed that all inhabited islands in the chain were defended. On June 13, the Navy admitted the Japanese landings on Attu and Kiska, saying that weather had delayed verification. Japanese forces were on Attu and ships were in Kiska harbor. A headline the next day was timely and prophetic: “Silence Shrouding Fight in Aleutians.”

The Army reported that its aircraft were trying to dislodge the invaders. The Navy called the landing “face saving.” The press speculated it was a toehold for future attacks on the mainland, while Alaska’s congressional delegate warned against complacency toward this invasion of American soil.

“Too Little and Too Late”

The Navy was not being complacent. It reported that an air attack had damaged six warships, including three Japanese cruisers, asserting that the action was a smaller version of the Midway victory but pragmatically noting, “The general situation in the Aleutians remains unchanged.”

In discounting the menace, Secretary of War Henry L. Stimson told the press that the enemy had only small forces in “one of the cloudiest places in the world.” He asked for patience: “I appeal to you for charity toward a communiqué under such circumstances.” The Japanese, having missed their opportunity to destroy the oil tank farm at Pearl Harbor, gloated over their destruction of the oil tanks at Dutch Harbor.

On June 20, a Navy statement said the enemy forces would be dealt with when the fog lifted. “The so-called mystery of the Aleutian battles is merely a mystery of weather, of fog, and snow coupled with a desire to keep the enemy in the dark. If the public is confused about the situation in western Alaska then so is the enemy—that is all to the good.” The assurances that Admiral Ernest J. King, Chief of Naval Operations, was not surprised by the attack did not allay the fears of people on the West Coast who considered the possibility of air raids from Japanese planes based in the Aleutians very real. Ten days after the fact, the Navy announced that Kiska and Attu had been occupied on June 12.

The lack of information caused problems that were fed by press speculation. Kiska could become a Japanese submarine base astride the Lend-Lease route to the Soviet Union. Its recapture could provide a submarine base for U.S. forays into Japanese waters. The once-ignored Aleutians were assuming huge importance in the press.

Senator D.I. Walsh (D-Mass.) of the Naval Affairs Committee defended the Navy policy of withholding information about the fight in the fog. “If the information given to this committee could be made public, which cannot be done without giving information to the enemy, the people would realize that with the vast problems confronting the Navy and with the tools and equipment [it] possesses at this time, there would be every reason for gratification for what has been done to date.”

The New York Times was still unhappy with the inaction when Hanson Baldwin editorialized at the end of June: “It is not weather alone that shrouds the Islands in fog. An obscurity of official comment also veils them.” He cited four instances. First, there were no “inhabitable” islands occupied. Then, it was a “face-saving” operation. It was just another experience of “too little and too late.” He rejected the excuse that the terrain was too rugged to benefit the Japanese.

During July and August, Navy and Army press releases reported air strikes as weather permitted. On August 1, the Navy release estimated about 10,000 invaders in the Aleutians but denied the rumor of a landing in the Pribilof Islands. On August 9, a Navy release said a surface task force had shelled Kiska. It implied that enough shipping had been in the harbor to justify an attack, but it added, “Nothing further is known about the results of the attack on Kiska.” Amplification a few days later said U.S. cruisers and destroyers in a bombardment “over the weekend” had damaged a destroyer and wrecked ground installations. The press provided twin assessments of the surface attack. First, the attack was to gain information because aerial reconnaissance was so poor in the fog. Second, Japanese airfields were not yet completed because the Navy would not risk surface ships under the threat of attack by land-based aircraft.