Yes, Machine Guns Are 'Legal' (But Here Comes All the Catches) 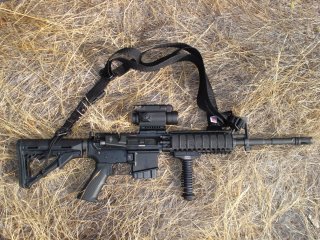 Here's What You Need To Remember: Since 1934 no legally owned machine gun has been used in a crime.

One of the common things heard after nearly every tragic mass shooting is that semi-automatic firearms –the AR-15 is often called out specifically – should be "banned" like machine guns. There is just one problem with that argument, machine guns aren't actually illegal. While this article isn't meant as legal advice, and one should always consult with local authorities, here are the quick facts on the legality of machine gun ownership.

In 37 states it is possible to buy a machine gun today. However, it isn't as easy as going to a local gun shop or even a gun show. Machine guns are legal at the federal level but highly regulated.

This goes back to the National Firearms Act of 1934 (NFA), which was enacted as part of the Internal Revenue Code, and was the first federal regulation of the manufacture and transfer of firearms. The NFA restricted the sales, ownership, use, and transport of short-barreled rifles and shotguns, machine guns, silencers and suppressors and an all-encompassing "destructive device." The latter included such things as modern artillery, rocket launchers, and military explosives.

However, the law "restricts" but it does not "prohibit" and that is something that has been misunderstood and misreported for years.

Items on the NFA list can still be owned. However, the items must be registered at the federal level, and this is a bit harder than it sounds. There is a common misconception that an individual must have a "Class III" license to own a machine gun. This is not true – but it also isn't completely wrong, a point this author will get to.

As noted previously, currently there are 37 states where it is legal to buy/own a machine gun. In those other 13 states – which not surprisingly include California, New York, New Jersey, and Massachusetts – state law has banned such ownership and for gun collectors, there is no magic loophole or really any way around it. Moving to another state that allows ownership is the only option, and the same applies if one should move from a state where a machine gun is legal to a state where it is not, the weapon would need to be sold/transferred. It isn't possible to be a resident of Ohio, buy a machine gun, and move to Illinois where it is illegal and think it is OK.

When moving from one state to another, owners of NFA items must report this to the NFA branch of the Bureau of Alcohol, Tobacco, Firearms, and Explosives (ATF or BATFE).

Buying a machine gun requires an extensive background check, and while certain firearms – those that fall into the category of Curios & Relics (C&R) guns – can be transferred directly from one owner to another, in most cases this sort of sale requires an actual Class III dealer. It involves filling out some very detailed paperwork, getting fingerprinted by local law enforcement or other approved service, providing a pair of passport photos, and submitting a $200 fee, which is the tax for said transfer.

Once this is done you wait. And then you wait some more. Unlike the National Instant Criminal Background Check that is used to buy a firearm at a gun shop, nothing is "instant," "quick" or "speedy" in this procedure. This is a slow process and due to the coronavirus will likely only be slower, once the NFA branch, which is located in Martinsburg, West Virginia, is reopened.

When buying any NFA item, patience isn't a virtue, it is required. There is no way to rush the process and generally takes around nine months. After that, the seller, or in most cases the dealer who handled the process, is provided the paperwork and stamp, and the buyer can pick up his/her machine gun.

There are a couple of other points that need to be mentioned. The laws on NFA items have been updated twice since 1934. The first was the Gun Control Act of 1968, which added language about "destructive devices" but also expanded the definition of a machine gun. For collectors, it came with mixed blessings. First, it offered an amnesty that allowed many older guns – including those that may have been brought back during World War II – to be registered, but it also banned the importation of foreign machine guns that could be sold to civilians.

The GCA also essentially regulated "dewats" or deactivated war trophies. In other words, if Grandpa had the barrel of his Thompson submachine gun welded shut after World War II, the government didn't really see that as a functional machine gun. That changed with the passage of the GCA. For a gun to be truly deactivated per ATF's guidelines the receiver needed to be cut or otherwise destroyed. But Grandpa could keep the Tommy Gun, so long as it was registered.

The next and final major change for machine gun ownership came with the Firearms Owners' Protection Act of 1986 (FOPA), which loosened some ownership restrictions. However, the bill codified some gun control measures, and prohibited civilian ownership or transfer of machine guns made after May 19, 1986. That meant only the machine guns that were produced – including those from old parts – prior to that date could be registered. The law also didn't come with the same type of amnesty that was offered in 1968. As a result, ANY machine guns not registered today cannot be registered. There is simply no way around it. The only options are to hand in such a weapon or cut/destroy the receiver.

FOPA has resulted in the cost of legal machine guns to skyrocket, simply because what is out there is all there can ever be. Today a Thompson submachine gun can cost more than a new car – but it is worth noting the transfer stamp still costs the same $200 that it cost in 1934. Back then a Thompson was around $200, or roughly the cost of a car – so in some ways, the value could be seen to keep up with inflation.

The final point worth noting is that some individuals can buy guns made after May 19, 1986. These are described as "post-samples," but are only available to dealers, manufacturers, military, and police. While it is possible to become a dealer of such weapons this isn't an easy process. Moreover, when said dealer retires from the business it is still impossible (or at least illegal) to retain any post-sample firearms.

Machine guns are complex items to buy, but as noted there is a small collector market. Buying such items isn't easy, but then again it shouldn't be. Since 1934 no legally owned machine gun has been used in a crime.