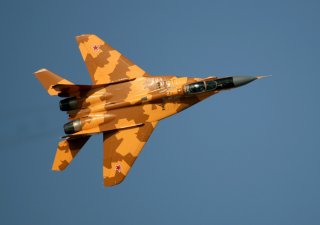 From 1978 to 1988, a secret U.S. Air Force unit flew captured Russian MiG fighters in a dangerous effort to teach American pilots how to defeat the planes in combat.

"Constant Peg was intended to train U.S. Air Force, U.S. Navy and U.S. Marines pilots how to fly and fight against a real Soviet aircraft," Earl Henderson, a retired lieutenant colonel and Constant Peg commander in 1979 and 1980, said in the documentary.

Hoyt Vandenberg, Jr., a general at Air Force headquarters, came up with the idea of organizing the MiGs in a squadron rather than assigning them to test programs. Gail Peck, a retired colonel who was the Constant Peg commander in 1978 and 1979, gave the squadron its code name, combining Vandenberg's call sign "Constant" with his wife's first name.

He selected the Tonopah test range in Nevada, as it was close to Nellis Air Force Base, home of the Red Flag war game and the Fighter Weapons School, where the Air Force trains its best fighter tacticians.

"As soon as they got the hangars built, we started putting airplanes together," Don Lyon, a retired master sergeant and Constant Peg's assistant chief of maintenance from 1978 to 1981, said in the documentary. "We had pieces ... we had airframes and wings and all that stuff, but they weren't flyable."

"They took airplanes that had been pulled out of swamps and deserts -- and God knows where they got them -- we didn't even pre-flight them," Peck said. "We had that much trust in our maintenance team. They didn't let us down. They were good."

"It wasn't that difficult to figure out," Lyon said. "It was a lot of reverse-engineering. But an airplane's pretty much an airplane."

Constant Peg operated dozens of aircraft. "In 1985 we had 26 MiGs -- MiG-21s and MiG-23s," John Manclark, Constant Peg commander from 1985 to 1987, told an audience at the Air Force Association in 2012, according to legendary reporter Bill Sweetman. "We had had MiG-17s originally but phased them out early, and by the end of the program we still had more MiG-21s than anything else."

According to Sweetman, Constant Peg also had at least one J-7, a Chinese MiG-21 clone.

Manclark said Constant Peg crashed an airplane roughly every thousand flight hours, an accident rate 30 times the Air Force average at the time. Pilots liked the speedy MiG-21 but feared the volatile MiG-23, according to Manclark.

Constant Peg helped to develop new technology. "The CIA gave us a flare dispenser from an [Su-25] Frogfoot [attack plane] that had been shot down in Afghanistan," Manclark recalled. "We gave it to maintenance – it was just a thing with wires coming out of it. Four hours later they had it operational on a MiG-21."

The flare dispenser allowed the Air Force to refine its weapons. The flying branch had designed the AIM-9P air-to-air missile to ignore U.S.-made decoy flares. But compared to American flares, Soviet flares were "dirty" and had "different burn time, intensity and separation," Manclark said. "The AIM-9P said 'I love that flare.'"

Based on Constant Peg's findings, the Air Force redesigned the seeker head on the AIM-9P.

Constant Peg took pains to remain a secret. "It was so totally classified that it was strictly on a must-know basis," Peck said. "Not a need-to-know, a must-know."

"We were trying to be non-military," Henderson said. "You'd look at these guys and they all had long hair and beards and certainly didn't look like an Air Force enlisted guy."

The Air Force declassified Constant Peg in 2006, decades after the unit had shut down and other organizations had assumed responsibility for flying Russian-made MiG-29s and Su-27s, among other foreign types.

"It's one thing to fight an airplane, but one that you've never seen and don't know its capabilities is a whole different story," Lyon said.

Peck described the wide-eye expressions he saw on the faces of pilots as they encountered a real, live MiG for the first time. "He's never seen a Russian airplane in flight for real."

"The comments we got from the pilots were the main indication that this was quite a program," Henderson said.

David Axe served as the former Defense Editor of the National Interest. He is the author of the graphic novels War Fix, War Is Boring and Machete Squad.

This article first appeared earlier last year and is being reprinted for reader interest.