'You First': The Army is Testing its New Reserve Parachute 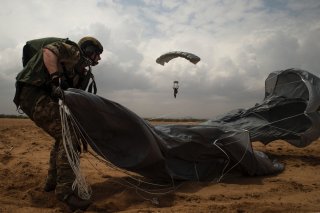 Here's What You Need to Know: During static-line parachuting, as the troop jumps out of the aircraft, a line that is hooked to the aircraft activates the parachute. Then, the troop must ensure that the parachute has deployed properly and stir it to the ground. In case of a malfunction, he can deploy his reserve.

The Army is testing a new reserve parachute in its quest to minimize malfunctions.

The new reserve parachute has a ripcord handle that is a single pin pull and an updated handle that protects from wind. In addition, there is a plastic panel on top of it so the jumpmaster can better inspect before a jump.

Currently, the Army uses the T-11 Advanced Tactical Parachute System (ATPS) as its primary static-line parachute. The T-11 was first introduced in 2007 and reached full operational capability in 2014. Designed for mass tactical airborne operations, the T-11 can carry approximately 400 lbs of combat gear and has a minimum drop altitude of 500 feet.

The T-11R, which is the reserve parachute, has a conical shape and is designed to open rapidly after activation with minimal collapse and altitude loss post inflation—meaning that it inflates almost immediately after it’s deployed in order to stem the troop’s descent. The T-11R is mounted on the front of a troop’s body and can be activated with both hands by pulling a handle in its center. It’s designed in such a way as to prevent the entanglement with the main canopy in case it’s deployed.

“Testing promotes and delivers a safe and more durable piece of equipment to the Warfighter,” said Lieutenant Colonel Derek Johnson, the chief of  the Airborne and Special Operations Test Directorate’s (ABNSOTD) Test Division, in a press release. “Soldiers relish in participating in day-to-day testing. It ignites their enthusiasm to rig and load a piece of equipment which will ultimately serve our future Soldiers during combat missions.”

“The T-11R Single Pin reserve parachutes were then inspected for any damage in order to make sure they can hold up to the high demands of the airborne mission,” said Sergeant 1st Class Katherine Greene, the test noncommissioned officer in charge at ABNSOTD.

In contrast, free-fall parachuting is a wholly different beast. Broken into two categories—High Altitude High Opening (HAHO) and High Altitude Low Opening (HALO)—it requires lots of training and practice to master. During a HAHO jump, the troop would deploy the parachute soon after exiting the aircraft at 30,000-25,000 feet and glide to the target, sometimes even for tens of miles.

During a HALO jump, the troop would freefall for some time before deploying the parachute close to the ground, ensuring a stealthy insertion.